Honor Vision smart TV is launched with Huawei's HarmonyOS | 4K/UltraHD | News | Rapid TV News
By continuing to use this site you consent to the use of cookies on your device as described in our privacy policy unless you have disabled them. You can change your cookie settings at any time but parts of our site will not function correctly without them. [Close] 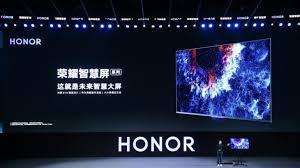 Launched at the recent 2019 Huawei Developer Conference (HDC, the device is Honor’s first smart screen product, which uses Honor’s Sharp Tech innovations. Equipped with three  Huawei intelligent chipsets - the Honghu 818 Intelligent Display, an AI Camera NPU and a flagship-level Wi-Fi chipset - the Honor Vision is also claimed to be the world’s first smart screen device to carry Huawei’s HarmonyOS. The CE giant recently launched the microkernel-based, distributed operating system that it claims will no less than ‘revitalise’ the mobile industry and ‘enrich’ the device ecosystem.

The product’s Wi-Fi chipset, the HiSilicon Hi1103, is claimed to be the world’s first chipset to support a 160MHz bandwidth with a download rate of up to 1.7Gbps, and 1.7 times faster than the industry average, enabling smoother and more stable video playback, especially for 4K HD video. Both variants of Honor Vision come with a 55-inch 4K HDR display, with a screen-to-body ratio of up to 94%.

“Honor Vision is not just television as we know it. It defines the future of television with Honor’s Sharp Tech innovations,” remarked Honor president George Zhao. “Honor Vision will play a more critical role in the future of smart family life. It is not only a home entertainment centre, but also an information sharing centre, a control management centre and a multi-device interaction centre.”
Tweet