US outshines Europe in online video consumption | Media Analysis | Business | News | Rapid TV News
By continuing to use this site you consent to the use of cookies on your device as described in our privacy policy unless you have disabled them. You can change your cookie settings at any time but parts of our site will not function correctly without them. [Close]

The regular online video update from Ampere Analysis has found that such viewing is growing strongly in the key US and European territories, though with marked difference between the two. 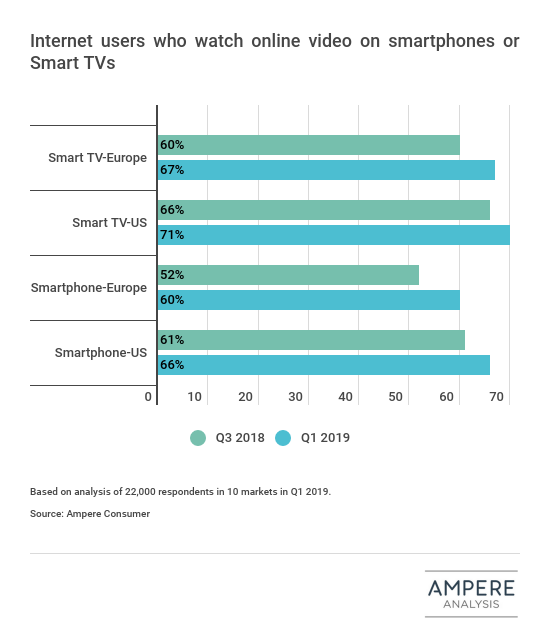 The update for the second quarter of 2019 found that the gap between the proportion of daily online video watchers in the US and Europe has once more increased, after narrowing in 2017 and early 2018. Overall just over two thirds (67%) of internet users in the US watch online video daily on at least one device. The proportion in Europe was someway lower at 52%.

Online video growth was strongest in Europe, with a seven percentage point increase in the proportion watching on smart TVs, and an eight point increase for smartphones. However, the US still enjoyed a higher proportion overall watching online videos on these devices, and particularly those who watch them daily. As regards smart TV, in the US 44% of the sample watched daily on the platform compared with 30% in Europe. For smartphones, this broke down to 33% in the US and 23% in Europe.

The proportion of internet users who frequently used a smartphone, tablet or laptop to watch video outside home was 16% in the US and 9% in Europe. Overall 48% in the US did this regularly, compared with 36% in Europe.

Looking at age demographics, Ampere found that 18-24 year olds were more likely to watch online videos daily on their smartphones than other groups. In both the US and Europe almost 90% of 18-24 year olds watched online video on their smartphone daily. Across all other age groups, those in the US were more likely to be daily viewers on smartphones than European counterparts.

Commenting on the research, Ampere Analysis consumer research lead Minal Modha said: “It is interesting to see young people in Europe and the US mirror levels of daily smartphone viewing, while in comparison older Europeans lag behind their US counterparts in this area. As the younger group ages, we expect them to continue watching video content on smartphone, so this viewing behaviour will continue to grow overall.”