Cable nets, VOD drive US TV viewing to two-year high | Ratings/Measurement | News | Rapid TV News
By continuing to use this site you consent to the use of cookies on your device as described in our privacy policy unless you have disabled them. You can change your cookie settings at any time but parts of our site will not function correctly without them. [Close]

While the country’s pay-TV industry is enduring huge pain right now, the US TV market is on the up again when it comes to viewing according to the inaugural Comcast Spotlight TV Viewership Report. 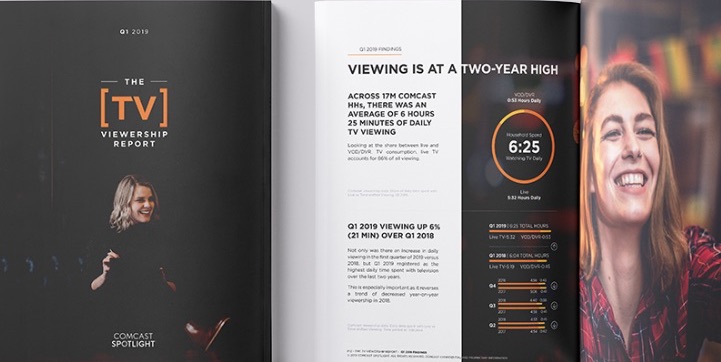 The TV Viewership Report from the advertising sales division of Comcast Cable is based on viewership insights from over 17 million households of the US cable giant across 65 markets in the US, capturing approximately nine billion hours of viewing data in the first quarter of 2019.

VOD alone drove viewing up 36% year-on-year and nearly four-fifths of households watched VOD in Q1 2019. Comcast households watched 100,000 VOD titles each month, up from 52,000 in 2016. On average, households spent 53 minutes watching VOD each day, and five hours and 32 minutes watching live programming. Yet live programming still continued to capture the largest share of viewing by a wide margin. Indeed, cable network viewing increased 7% and made up two-thirds of total viewing.

The report cautioned that an abundance of choice in both content and distribution options was contributing to viewing fragmentation. The report found in Q1 2019 fragmentation happening in two key areas: network selection and daypart mix. The average household watched 34 networks while there were 308 different most-watched networks (the network with the most viewing in a household) across Comcast households. More than half of all viewing (68%) occurred outside of television’s traditional primetime.

“This is the first time that Comcast Spotlight has published such a comprehensive report on television viewing trends, and it couldn’t come at a better time,” remarked Comcast Spotlight chief revenue officer Brendan Condon commenting on the Comcast Spotlight TV Viewership Report. “TV viewership has changed dramatically over the past five years, and we need to ensure that advertisers understand these new viewing patterns so they can plan and execute the most effective media campaigns.”