US pay-TV ARPU slides significantly | Media Analysis | Business
By continuing to use this site you consent to the use of cookies on your device as described in our privacy policy unless you have disabled them. You can change your cookie settings at any time but parts of our site will not function correctly without them. [Close]

The average standalone pay-TV service ARPU declined 10% from 2016 to 2018, when consumer-reported monthly spending on pay-TV declined from $84 to $76. 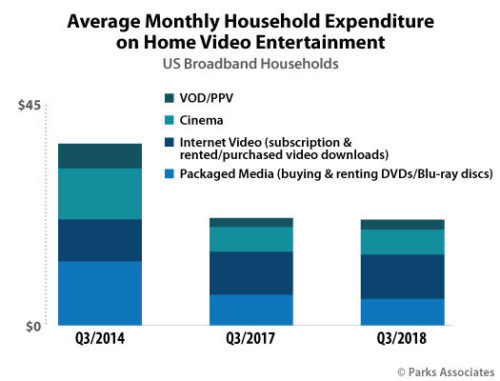 Self-reported expenditures on non-pay-TV home video entertainment also declined 30% per month over the past seven years, peaking at nearly $40 in 2014 to slightly over $20 at the end of 2018, according to analysis from Parks Associates.

Meanwhile, pricing pressure for consumer services is forcing increasing conflict in carriage negotiations, the firm said, which in turn fuels the interest among providers in continued vertical and horizontal consolidation.

“Traditional pay-TV providers (MVPDs) have faced continued subscriber losses due to increasing consumer choice from OTT services, so they are deploying skinny bundles and vMVPD services to create more choice among viewers,” said Elizabeth Parks, president, parks Associates. “For pay-TV service providers, traditional and online, they are exploring new areas in content ownership and development, and to be successful in these efforts, understanding consumer activity and motivation related to adoption and use of their services is critical.”

Brett Sappington, senior research director and principal analyst, Parks Associates, added: “Subscription online video is the only growth category for consumer-paid video entertainment beyond pay-TV. Operators, struggling with declining ARPU for standalone pay-TV services, are anxious to leverage this trend. Operators are taking differing approaches. Some, including Comcast and DISH, are offering subscriptions to third-party OTT video services and are integrating them into their discovery interfaces.

'Partnering gives operators a chance to serve as content aggregator, a familiar position. Others, including AT&T and DISH, are expanding their competitive reach online and have introduced vMVPD services.”