Pay-TV tumbles further as cord-stacking continues to grow | Media Analysis | Business
By continuing to use this site you consent to the use of cookies on your device as described in our privacy policy unless you have disabled them. You can change your cookie settings at any time but parts of our site will not function correctly without them. [Close]

Research from Ampere Analysis has confirmed the secular decline of pay-TV–only households across the globe while subscription video-on-demand–only and pay-TV/SVOD combinations are increasing. 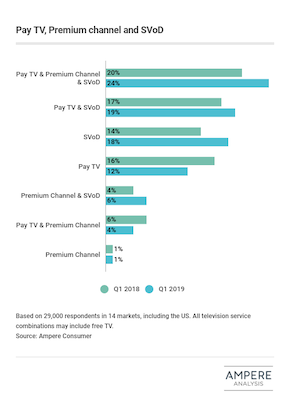 The research showed that among those taking any subscription television service, a combination of pay-TV, premium channel and SVOD is the most common, followed by pay-TV and SVOD and SVOD-only.

“While there are markets such as Australia, Italy and Japan where SVOD-only is becoming the norm, this data reinforces pay-TV's position in the market, and its continued importance to consumers in the viewing mix,” remarked Minal Modha, consumer research lead at Ampere Analysis.