Movistar+ Lite proclaimed instant success | Ratings/Measurement | News | Rapid TV News
By continuing to use this site you consent to the use of cookies on your device as described in our privacy policy unless you have disabled them. You can change your cookie settings at any time but parts of our site will not function correctly without them. [Close]

Only just more than a month since the over-the-top service began life, Telefónica is claiming its Movistar+ Lite service as a hit with two and a half hours of daily consumption among its users. 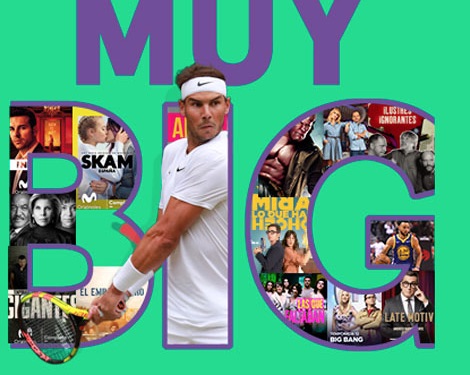 First announced by Telefónica in April 2019,  Movistar+ Lite gives access to core Movistar+ original content of the kind offered in the company’s # 0 and #Vamos packages. It will include sporting events, Movistar Series and Movistar Seriesmanía. In all there will be a catalogue of 300 series and documentaries, 270 films and 60 programmes on-demand and third-party content.

Programming includes entertainment series such as La Resistencia, Late Motiv and the new format by Patricia Conde and Ángel Martín, Dar cera, polish # 0. It also offers original Movistar series, such as Spanish hit Hierro and other titles such as Arde Madrid, Gigantes, El Embarcadero and La Peste as well as a range of international series including The good fight, Billions and Victoria.

Leading the sport options is tennis from Wimbledon where national hero Rafael Nadal is drawing record audiences as he marches to a semi-final agasint Roger Federer. Other leading sport includes the Endesa League, NBA and Serie A, Bundesliga and Ligue 1 football.

Research has found that almost half of Movistar + Lite consumption has been made through smart TVs, while the rest is shared between mobile phones, tablets and computers. Four-fifths of content is consumed on-demand.

“The degree of acceptance by users is far exceeding our expectations and the level of consumption is very high, especially for a month like June, which makes us very hopeful for the new season in September,” commented Movistar+ president Sergio Oslé.