European TV content providers face stiff challenge in VOD arena | VOD | News | Rapid TV News
By continuing to use this site you consent to the use of cookies on your device as described in our privacy policy unless you have disabled them. You can change your cookie settings at any time but parts of our site will not function correctly without them. [Close] 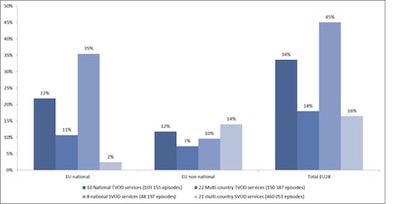 The Origin Of TV Content In VOD Catalogues report for 2018 looked at 61 VOD country catalogues corresponding to 29 national VOD services/catalogues and 32 multi-country services/catalogues. It found that on average, national transactional VOD and subscription VOD services have a higher share of EU TV titles (respectively 45% and 46%) than multi-country TVOD and SVOD services, which had shares of 31% and 25% respectively. As far as EU TV content is concerned, they have also a higher share of national content.

Yet on a per episode basis, European TV content accounts for just 24% of all episodes found in TVOD catalogues and 19% in SVOD catalogues. In the latter category, international TV content had a higher share on than EU titles.

Whereas the US is the main country of origin for TV content available, in TVOD and SVOD, content from outside the EU or outside the US represents a significant part of TV content on offer in SVOD. There were found to be more non-EU/non-US titles and episodes available in SVOD than EU titles/episodes.

The observatory also revealed that the leading five EU production countries — the UK, Germany, France, Sweden and Denmark — account for 91.2% of all EU TV titles on TVOD and 84.1% on SVOD for the UK, France, Spain, Sweden and Germany.

Yet EU titles circulated less than TV titles from other regions of production. If single titles were considered, the share of EU TV content would be higher — 53% of all single titles on TVOD and 40% on SVOD services — than if taking into account the number of catalogues in which they are present. But, on average, found the Origin Of TV Content In VOD Catalogues report, one given EU TV single content is available in fewer countries (3.3 in SVOD and 1.2 in TVOD) than a given US title (5.8 and 2.1 respectively). Titles from outside the EU and outside the US also circulate better than EU titles.
Tweet