Netflix adopts ‘surprise drop’ strategy for select genres | Media Analysis | Business | News | Rapid TV News
By continuing to use this site you consent to the use of cookies on your device as described in our privacy policy unless you have disabled them. You can change your cookie settings at any time but parts of our site will not function correctly without them. [Close]

Reacting to the ever-growing competition in the subscription video-on-demand market, and showing that it is not resting on its laurels, Netflix has adopted divergent release timing plans according to title categories. 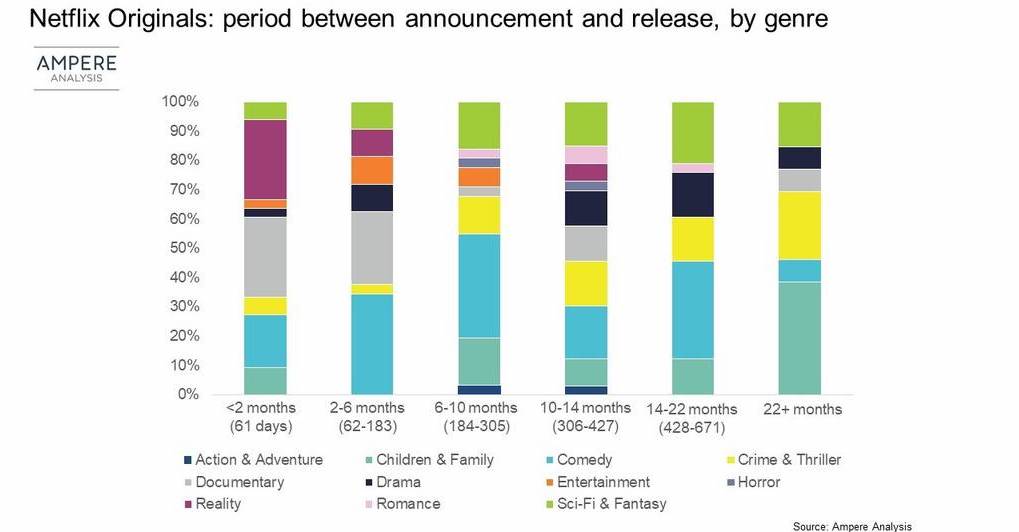 Research from Ampere Analysis has revealed that 19% of Netflix original TV shows are released within two months of their initial announcement. Recent adoption of a quick-release or ‘surprise drop’ marketing strategy includes blockbuster unscripted A-list comedies such as Amy Schumer and Trevor Noah’s stand-up shows, and concerts such as Taylor Swift’s ‘Reputation’ Tour.

This approach contrasts sharply with the slow-burn release strategy for scripted drama and comedy which Ampere calculates have an average production period of 13 months from announcing the show to its release.
Drilling deeper into its research, ampere found that documentary and reality series dominated periods of less than two months with 39% of documentaries and 64% of reality series released less than two months after they were first announced. Content in the children and family category has the longest production period, whether created by Netflix and a single producer, or as a co-production. Crime and thriller and sci-fi and fantasy productions were very tightly grouped, each taking around a year to produce.

While overall a little over a third (36%) of unscripted Netflix originals were released less than two months after announcement, only 7% of scripted titles did so as well. Indeed, over 90% of productions taking 14+ months to release were scripted. Almost all (95%) of the slowest 19 releases were scripted (release after at least 600 days) with over half of Netflix scripted originals (52%) have taken longer than a year between announcement and release, compared to just 7% of unscripted titles.

The strongest grouping shows that 25% of crime content was released between 13-15 months after announcement—a crucial period for the genre said Ampere. At more than two years in production, Our Planet, Netflix’s extremely high-budget, David Attenborough-narrated natural history documentary, stands out as an anomaly in the unscripted space. Magic for Humans also had a long production period.

Netflix co-productions were found to have a longer average creation time, taking an additional 2.8 months to craft compared to sole Netflix commissioned shows. The shortest co-production was announced 109 days before release – by this point, 39 solo Netflix productions had already been released.

Offering explanation as to whether Netflix was adopting a quick-release strategy by withholding announcements to give it an edge over its competitors and to slow down potential imitators, Fred Black, Ampere Analyst and author of the study said: “With competition heating up in the SVOD arena, Netflix is using its surprise drop strategy to foil competitors and delay them from copy-catting new content formats. But this is not a simple approach, there are huge variations in the time content takes from announcement to release, based on genre, whether it’s scripted or not and if it’s a sole or co-production.”