Subs warm to ad-based Netflix plan but only with significant discount | Media Analysis | Business | News | Rapid TV News
By continuing to use this site you consent to the use of cookies on your device as described in our privacy policy unless you have disabled them. You can change your cookie settings at any time but parts of our site will not function correctly without them. [Close]

Investigating the ramifications if speculation regarding ad-supported Netflix subscription plans were true, Hub Entertainment Research has discovered a potential yet very conditional acceptance of such a move. 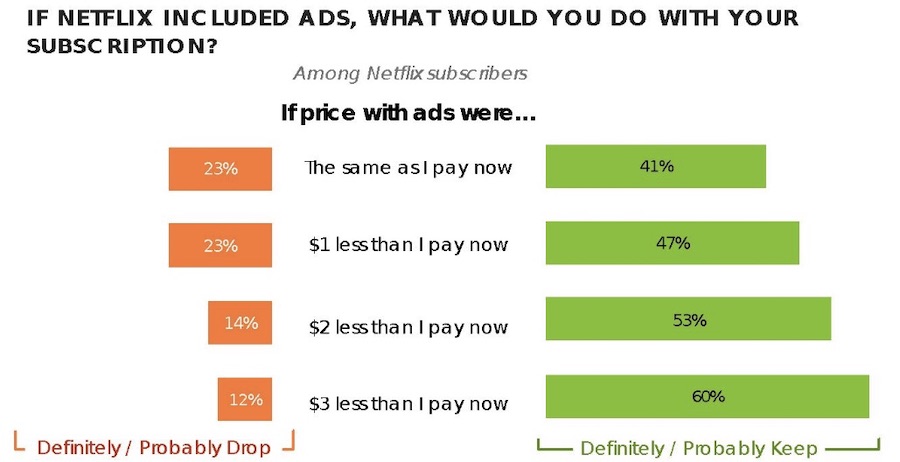 Indeed in its Monetisation of Video report — conducted in June 2019 among 1,765 US consumers with broadband, who watch at least 1 hour of TV per week — Hub found that many of the leading subscription video-on-demand service’s customers would be open to the idea, but only with a significant discount off the current ad-free subscription.

The study fundamentally warns Netflix risks losing about a quarter (23%) of its subscriber base if it switched from ad-free to ad-supported—with no reduction in subscription fee. Fewer than half (41%) of subs say they’d definitely or probably keep their subscription, with the remainder undecided.

In addition Hub found that it was only at a $2-$3 lower price point where the company saw stronger levels of retention and fewer potential subscriber losses. At $2 less per month than the current fee, just over half (53%) said they’d keep Netflix and 14% would drop. The remainder were unsure. At $3 less per month, three-fifths said they’d keep the service and 12% would abandon it.

In what may be encouraging news for Netflix, Hub’s report revealed that if the SVOD leader offered a $3 lower price with an ad-supported tier as an option, it could persuade a majority of the survey subscribers to sign up for the alternative.

“The success of any Netflix ad-supported plan—whether to replace or add to its current offering—will naturally depend on whether consumers feel they’re getting a sufficient price-break return on their ad-viewing investment,” said Peter Fondulas, principal at Hub and co-author of the Monetisation of Video study.  “But one thing is clear from these results: after one increase already in 2019, any attempt by Netflix to use an ad-supported plan as a reason to hike its ad-free price again could seriously backfire.”