Total cross-platform viewing time continues to decline as online gains momentum | Media Analysis | Business | News | Rapid TV News
By continuing to use this site you consent to the use of cookies on your device as described in our privacy policy unless you have disabled them. You can change your cookie settings at any time but parts of our site will not function correctly without them. [Close]

Total cross-platform television viewing times across the US and major European markets are declining as consumers increasingly turn to non-linear platforms as a substitute for traditional TV viewing, according to research from IHS Markit. 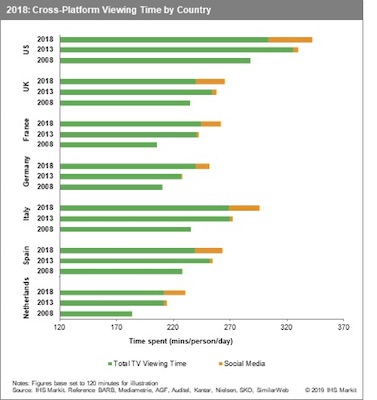 I
The Consumer Research: Devices, Media & Usage study found that excluding social media, total average daily video viewing time for the countries analysed stood at 273.7 minutes per-person per-day in 2018. This compares to a peak of 284.3 minutes in 2013, when linear viewing held an 87% share of total viewing in contrast to a 67% share in 2018.

IHS Markit believes that the decline in minutes suggests a shift in viewing habits as non-linear becomes the television format of choice for more viewers in the United States, the United Kingdom, France, Germany, Italy, Spain and the Netherlands.

The study found that online long-form video — having a duration of 15 minutes or longer — was the non-linear TV type gaining the most popularity. Average viewing times for online long-form video expanded by six minutes per-person, per-day, year-on-year in 2018. Online long-form was a key area of growth across all markets, driven largely by online subscription video services such as Netflix. IHS Markit suggested that existing pay-TV customers were more likely to subscribe to OTT video services with a growing preference towards online video players when looking for something to watch.

Time spent on social video saw the highest level of increase, adding more than eight minutes per-person per-day. Only when growth in social video is added do we see total cross-platform viewing time increasing, with little evidence of social viewing being substitutional to linear TV. When including social video viewing, total time spent on video viewing for the countries analysed rose to 303 minutes per person per day in 2018, up from 299 in 2017. Facebook drove most of this growth as it has increasingly moved towards a video-centric strategy across its social media platforms – Facebook, Instagram and WhatsApp.

“During previous years, non-linear television viewing was largely additive to traditional linear TV viewing, driving up the total number of minutes watched,” said Rob Moyser, research analyst at IHS Markit, commenting on the Consumer Research: Devices, Media & Usage survey. “However, non-linear now has become an alternative for linear TV for many consumers. As a result, total cross-platform viewing time is returning to levels seen prior to the rise of on-demand viewing.”

A total of 28% of adults across the US, the UK and Germany cast video content from their mobile device onto a TV at least once a month, survey conducted in November 2018. This total rose to 46% when looking specifically at viewers aged 18–24 years old.