SVOD surge sees video pirates scuppered | Security | News | Rapid TV News
By continuing to use this site you consent to the use of cookies on your device as described in our privacy policy unless you have disabled them. You can change your cookie settings at any time but parts of our site will not function correctly without them. [Close]

Research from Ampere Analysis has revealed a steady fall in the proportion of consumers who say that they regularly use pirate sites and services to watch online video, with the burgeoning subscription video-on-demand market a key driver. 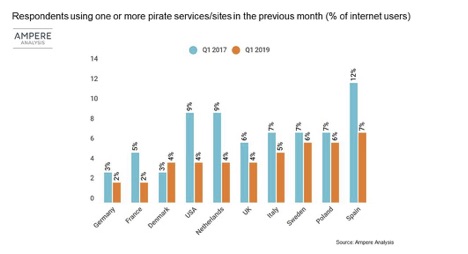 The study showed that in three-year period between Q1 2016 and Q1 2019, there have been particularly sharp declines in video piracy in Spain, the US, the Netherlands and France. The analyst attributed the drop to the fact that that with the growth in all-you-can-eat legal services, users no longer need to turn to illegitimate sources to get their viewing. Pointedly, on average, in markets where either catch-up or SVOD online video viewing has risen the most, piracy has experienced the biggest drop.

The study showed that Spain, traditionally a very high piracy market, as a case in point. The market has seen a 47% increase in claimed SVOD and catch-up viewing in the three-year period, and almost the same (45%) decrease in the proportion of internet uses regularly turning to pirate services.

The research also suggested that just having access to on-demand services isn’t enough, consumers must actually use the services for their usage of piracy sites to be impacted. The content on SVOD and catch-up services needs to be appealing for the audience.

Despite having piracy on the run Ampere Analysis director Richard Broughton struck a note of caution. “The on-demand market is moving into a period of ‘siloisation’ where producer and distributor brands go direct to the consumer, at the same time restricting the amount of content they license to third party services,” he observed. “If the mainstream OTT players have less of the content users want to watch, when they want to watch it, there’s a genuine risk that usage of these SVOD and catch-up services could begin to slump, something the pirate operators will be quick to capitalise on.”