Smithsonian AR app celebrates Moon landing anniversary | Social TV | News | Rapid TV News
By continuing to use this site you consent to the use of cookies on your device as described in our privacy policy unless you have disabled them. You can change your cookie settings at any time but parts of our site will not function correctly without them. [Close]

The Smithsonian Channel has launched an immersive augmented reality (AR) app that allows viewers to experience and interact with the Moon programme through key moments from the network’s Apollo's Moon Shot series. 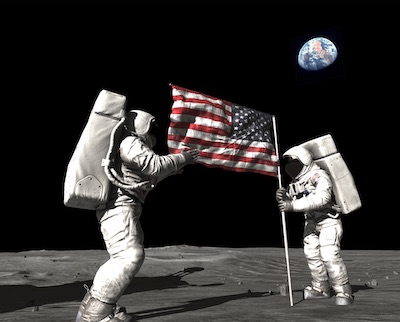 Users with AR-compatible smartphones and tablets can use the free app to explore the lunar landscape, launch a Saturn V rocket, pilot the Apollo Lander and take a selfie in an Apollo 11 spacesuit, and share their experiences on social media.

The Smithsonian app also enables users to step inside the command module and get a close-up of handwritten notes left by astronauts Neil Armstrong, Buzz Aldrin and Michael Collins.
It also offers a glimpse of rare Apollo 11 artefacts and paraphernalia from NASA’s lunar missions, including authentic 3D scans of Neil Armstrong’s space suit and the Lunar Command Module.
Tweet