iQIYI releases China’s first interactive film and TV work | Programming | News | Rapid TV News
By continuing to use this site you consent to the use of cookies on your device as described in our privacy policy unless you have disabled them. You can change your cookie settings at any time but parts of our site will not function correctly without them. [Close]

Chinese online entertainment service iQIYI has unveiled what it calls “the first domestic interactive film and television work”, His Smile. 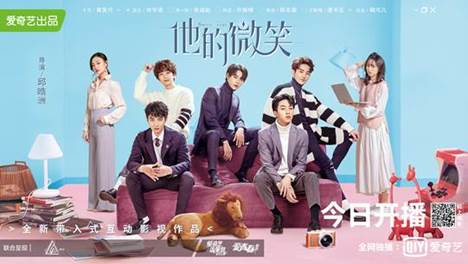 His Smile, produced by iQIYI and Linghe Media, tells the story of the interaction between a newcomer in the workplace, who is an assistant talent manager at a media company, and members of upcoming boy band hoping to make their big break. By opening up the option of choice in the story, the work allows the audience to enter themselves into the story as the character of the talent manager, making choices according to personal preferences, expanding the storyline related to it, and transforming the viewer to the player to achieve an immersive entertainment experience.

“With the accelerating growth of 5G technology, the traditional film and television content structure will continue to adapt based on the new technological environment,” said Liu Wenfeng, chief technology officer and president of infrastructure and intelligent content distribution business group (IIG), iQIYI.

Wang Xiaohui, iQIYI’s chief content officer and president of professional content business group (PCG) added: “Aside from offering Chinese audiences a brand-new viewing experience, the launch of His Smile also marks the introduction of a standard to interactive film and television works and that is bound to change the landscape of China’s film and television industry”.

iQIYI said it plans to launch an interactive video platform (IVP) to help creators create interactive video content conveniently and efficiently. Before His Smile, China’s interactive works have mainly fed off marketing  or been received by early adopters as derivatives of games, variety shows, dramas, and movies, and are mostly only carried in the form of H5 or PPT pictures.

The online entertainment service however, provides branching plotlines, perspective-switching, role switching, hidden content viewing of the script structure, and other AI-based preference reading technology.iQIYI has already applied interactive functions to variety shows and trailers, such as the first domestic interactive variety show trailer for The Big Band, which users can experience in the latest version of the iQIYI App.