French broadcasters look to original content to take on SVOD giants | Media Analysis | Business
By continuing to use this site you consent to the use of cookies on your device as described in our privacy policy unless you have disabled them. You can change your cookie settings at any time but parts of our site will not function correctly without them. [Close]

As they aim to compete with the ever growing threat of Netflix in the country, French broadcasters have embarked on an investment drive in local original productions, ramping up exclusive content, international partnerships and licensing deals. 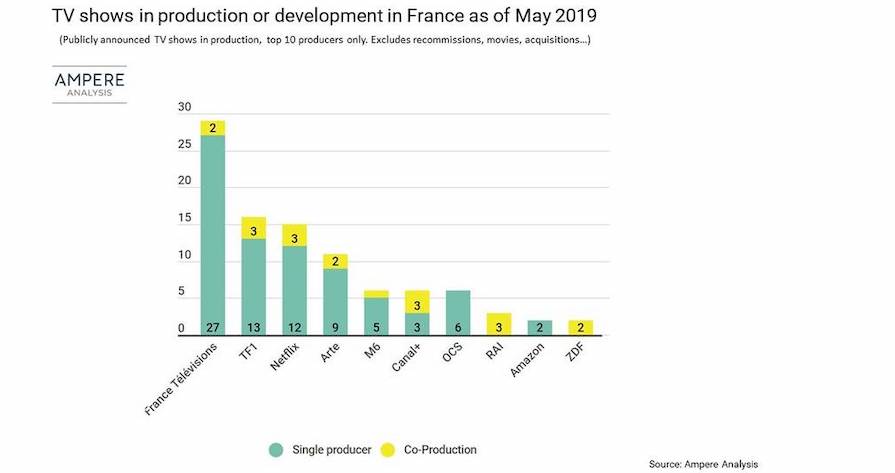 That’s according to research from Ampere Analysis which calculates that in order to fend off the challenge from the subscription video-on-demand leader which claims five million French subscribers, the top five TV companies in France — France Télévisions, Canal+, TF1, M6 and Orange — spent €5.4 billion on content, with over 40% of that figure dedicated to originals. In addition, the broadcasters had at the end of May 2019 106 new local shows in development or production.

That notwithstanding, the analyst asked whether this was enough with Netflix currently producing 15 new programmes for a French audience and other competition emerging from global players such as beIN Sports, Mediapro and Amazon Prime Video.

Even though France’s OTT and SVOD markets currently lag behind the like of Scandinavia (whose local SVOD players are enjoying competitive success against Netflix) , the UK and the US — the local subscription OTT video market represented only 3% of nearly €14 billion in audio-visual service revenues in 2018 — Ampere stressed that digital subscriptions are growing rapidly.

To tap into this growth, France Télévisions, TF1 and M6 announced the creation of SVOD platform Salto which will launch later this year. Offered alongside their free channels, Salto will provide TV shows and exclusive content with an emphasis on French and European productions. Through this new service, the three broadcasters aim to generate revenue from subscriptions and maintain control over content rights following their initial broadcast window. In what may be a common tactic going forward in the battle against Netflix, France Télévisions has said it will cease licensing the French digital rights of Call My Agent! to the SVOD leader and has signed an exclusivity time period on digital rights for the shows it co-produces or commissions.

In addition, Ampere says that the local players French have reduced their spend on acquired content to redirect funds to producing their own local originals that will appeal to both a domestic and international audience. It says that this tactic offers two significant benefits: monetisable IP portfolios, and a diversified revenue stream.

“French consumers are adopting digital TV subscriptions quickly, and the local broadcasters know they must respond fast if they are to protect their revenues in a changing media landscape,” noted Ampere Analysis Analyst Léa Cunat. “With increasing competition from international behemoths Netflix and Amazon Prime Video, fierce price wars for exclusive sports content, and flat ad revenues, there’s no shortage of tactics and strategies being employed to stay in the game. But the emphasis put on original content encourages creativity and the emergence of new talents. It’s a fascinating market to watch as it transforms.”