Gametoon HD channel to broadcast eSports Balkan League | Programming | News | Rapid TV News
By continuing to use this site you consent to the use of cookies on your device as described in our privacy policy unless you have disabled them. You can change your cookie settings at any time but parts of our site will not function correctly without them. [Close]

SPI/FilmBox has acquired the exclusive linear and digital rights to the Esports Balkan League (EBL), the first professional eSport competition, for its Gametoon HD channel. 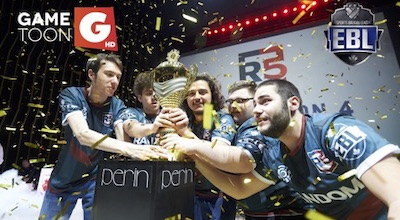 EBL is one of Europe's thirteen eSports leagues and it is officially endorsed by Riot Games, the developer and publisher of League of Legends, the multi-player online battle arena (MOBA). In 2019, the top eight Balkan EBL teams will compete for an aggregate prize pool of €40,000.

The league will see the best eight teams from ten European countries compete in a League of Legends tournament for the championship title. Millennial-focussed Gametoon HD is based around gaming and eSports offers wholly-owned exclusive contents and timeslots such as Stream Nation and eSports tournaments. The channel is available worldwide in English and will soon be available in Polish.

“It is with great pleasure that I announce the SPI/FilmBox’s Gametoon HD channel is the sole carrier of EBL (League of Legends), the biggest regional esports competition featuring the most popular online video game ever,” said Revi Benshoshan, director of acquisitions at SPI International. “It is only fitting that SPI, one of the most strategic and competitive media companies in the world, signed an exclusive license agreement with Fortuna Esports, a prominent player in the field of esports event management. This summer, Gametoon HD is the only channel in the world where you can watch Esports Balkan League (League of Legends).”

“We are thrilled about our partnership with SPI/FilmBox and because Esports Balkan League will be available to an even wider audience through Gametoon HD in its upcoming fifth season,” said Mihajlo Jovanović-Džaril, founder and CEO of Fortuna Esports which claims to be the regional leader for eSports in Southeast Europe and whose portfolio includes the Esports Balkan League. “Our region is home to many great gaming talents and it has been our mission to bring them under the spotlight. This deal is doing exactly that.”