Video length getting shorter as engagement accelerates | Media Analysis | Business
By continuing to use this site you consent to the use of cookies on your device as described in our privacy policy unless you have disabled them. You can change your cookie settings at any time but parts of our site will not function correctly without them. [Close] 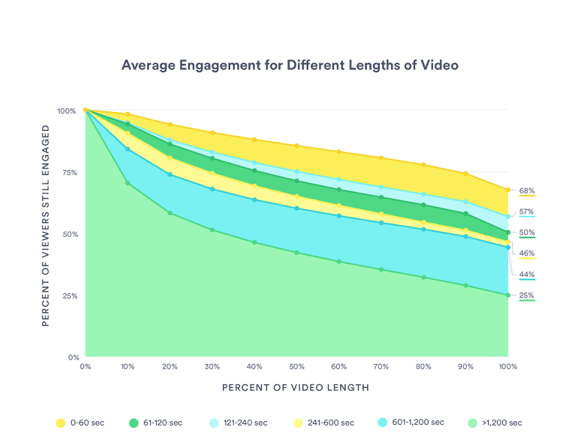 That’s according to the Vidyard Video in Business Benchmark Report which also found that business audiences are staying tuned longer: About half (52%) of viewers watched all the way through to the end of the video across all viewing sessions. This is up from 46% who would do the same in 2017. Meanwhile, 68% of viewers watch a video to the end if it’s less than 60 seconds.

The study also found that mid-week is the most popular time for business video views, with Thursday seeing the most views overall. Viewing peaks around noon to 2 pm ET regardless of the day.

Smaller companies accelerate video content creation, too. Businesses with 31-200 employees published a staggering 510 new videos on average in 2018, second only to large businesses with more than 5,000 employees. More small and medium-sized companies reported using both internal and external video production resources to help them scale video creation while also producing higher quality content. 52% are using both vs. 37% in 2017.

Interestingly, in 2018, 85% of companies reported using some form of video analytics. The use of intermediate or advanced video analytics has increased significantly, by 19% over the previous year.
The most common types of videos are webinars, demos, and social media videos. Explainer videos, product videos and customer videos are also popular formats.

“More than ever, businesses are using video throughout the customer journey,”the report noted. “They recognise the power of video to explain to potential customers what they do, what they offer and how it helps them. The popularity of webinars suggests that there’s also a thirst among brands’ audiences for longer-form educational content.”