Roland Garros delivers 31% increase in video streaming for Eurosport | Ratings/Measurement | News | Rapid TV News
By continuing to use this site you consent to the use of cookies on your device as described in our privacy policy unless you have disabled them. You can change your cookie settings at any time but parts of our site will not function correctly without them. [Close]

Attributing its success to the global direct-to-consumer (DTC) strategy of its parent, Discovery, Eurosport has reported what it called a significant rise in digital viewership for the French Open tennis championship at Roland Garros. 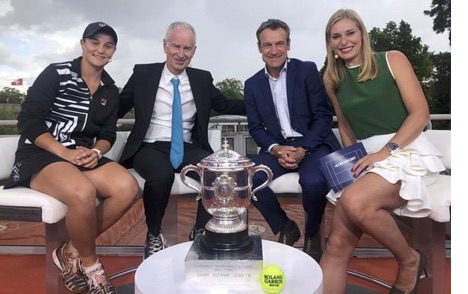 Eurosport went big on Roland-Garros 2019, showing live every minute from over 600 matches and 250 hours of coverage in more than 50 countries.

The pan-European broadcaster saw a 31% year-on-year increase in unique views of the Roland-Garros 2019 tournament via it’s dedicated over-the-top (OTT) video streaming service, Eurosport Player, and the Eurosport app. The average viewing time via the Eurosport Player also witnessed a big boost with users watching for 45% longer than for the tournament a year ago. Eurosport.com, including both the website and app, generated 25% more unique visitors compared with the 2018 event.

It also witnessed significant audience growth across its localised TV coverage throughout Europe. The Eurosport 2 channel saw 15% growth in average live audience overall, with the local Eurosport 2 channels in the Netherlands up 213% compared with 2018; Poland increasing 26% year-on-year; and Spain, where a 97% rise in viewership was driven by the best-ever audience for the men’s final in the country. - experiencing what were described as significant year-on-year increases compared with 2018. There was a similar trend on Eurosport 1 with double-digit growth in France (+21%), the UK (+17%) and Norway (+50%) where the two finals delivered the highest ever ratings for tennis matches in the territory.

Commenting on the results, Dave Schafer, Eurosport SVP sports content, operations and planning, said: “It’s great to see that tennis fans across the continent are engaging so passionately with our content and coverage and the results are clear evidence that our increased consumer focus is paying off. Our multi-screen content strategy is driving video and streaming growth, but our short-formats are also translating to TV and entertaining traditional audiences.”