UEFA launches free-to-air OTT football service | OTT | News | Rapid TV News
By continuing to use this site you consent to the use of cookies on your device as described in our privacy policy unless you have disabled them. You can change your cookie settings at any time but parts of our site will not function correctly without them. [Close] 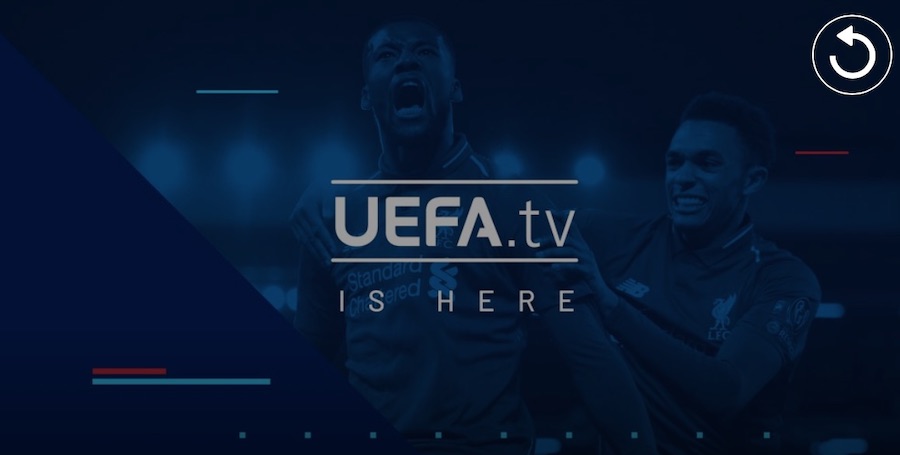 Running on the web and on iOS and Android mobile apps, the new UEFA.tv will offer original programming based on 60 years of European football archive. It will also serve to promote all of UEFA competitions — including youth, women’s and futsal games — and will screen behind-the-scenes content, interviews and a range of additional content.

All the video content is behind a free-to-view registration, and supporters will have the opportunity to watch live UEFA competition matches even when there is no rights-holder in the territory where they are living. However, UEFA assured that the new service would not compete with TV channels but would be complementary, taking advantage of the wide range of content available at UEFA, including archive footage, delayed games, magazine programmes or futsal, women's and grassroots competitions. In addition, UEFA sees the service as capable of being used by its 55 federations to increase global reach and visibility.

Germany’s Bundesliga will be the first national league to be represented on the European governing body’s new digital portal from August 2019. UEFA and the Deutsche Fußball Liga (DFL) have entered into a partnership that provides for a separate channel on the streaming platform with videos from the Bundesliga in addition to European competitions. The Bundesliga content on UEFA.tv will be available in major European markets such as the UK, Italy, Poland, Russia, Spain and Turkey as well as the Middle East and Africa from the start.

“The digital landscape is evolving, and we need to be in a position where we can anticipate and respond to these changes,” said UEFA president Aleksander Čeferin commenting on the launch of UEFA.tv . “UEFA is an innovative organisation and by introducing this platform, we will be making football and our competitions more accessible to supporters around the world. Our partnership with the Bundesliga is yet another example of the unity of European football and clearly demonstrates our desire to address future opportunities together for the promotion of our sport.”

“Media use is changing constantly,” added DFL CEO Christian Seifert. “UEFA’s new streaming service is a very timely step to reach football fans around the world, especially younger target groups. The DFL has consistently backed and initiated technological and media innovations ever since it was founded. We are therefore delighted to be the first national league partner in this project, which will allow us to get even more people around the world excited about the Bundesliga in the future.”
Tweet