Simulmedia gains $29MN in funding | Media Investment | Business
By continuing to use this site you consent to the use of cookies on your device as described in our privacy policy unless you have disabled them. You can change your cookie settings at any time but parts of our site will not function correctly without them. [Close] 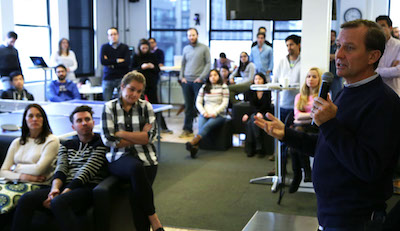 In addition, David Levy, former president of Turner Broadcasting and long-time senior executive at Time Warner and AT&T’s WarnerMedia, has rejoined the Simulmedia Board of Directors as an independent director.

“It’s no accident that these moves coincide with significant and positive market developments,” said Dave Morgan, founder and CEO of Simulmedia, in a blog. “In the six or so months since we announced the unbundling of our targeted TV media offering into a transparent, software-driven, national TV ad marketplace that operates across all of the largest national TV programmers and broadcasters, we have seen our revenue double, year-over-year, and our profit grow significantly.”

He added, “Clearly, the mission that Simulmedia was founded on more than 10 years ago - to help advertisers and media owners solve for the growing fragmentation, waste and opacity in TV and premium video advertising while driving more campaign yield - is resonating. That makes now the perfect time to strengthen our balance sheet as we prepare for even more growth from a surging market for a digital and data-driven approach to TV advertising.