Half of Americans embrace connected TV | Media Analysis | Business | News | Rapid TV News
By continuing to use this site you consent to the use of cookies on your device as described in our privacy policy unless you have disabled them. You can change your cookie settings at any time but parts of our site will not function correctly without them. [Close]

Half of Americans embrace connected TV

More than half of the US population (57.2%) will watch connected TV in 2019, driving a proliferating amount of connected TV inventory available to advertisers. 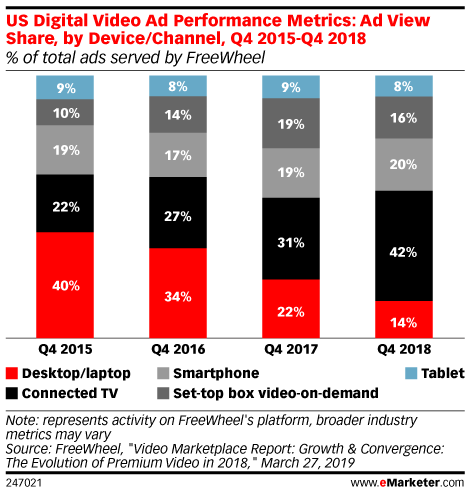 That’s according to eMarketer , who found that viewership for connected TV (defined as TV delivered via the internet, be it via a smart TV or another device, such as a Blu-ray player, game console or Roku) is up from 51.7% in 2017.

And, in a quarterly review of digital video ad impressions served by Extreme Reach to various devices across North America, the firm found connected TV’s impression share jumped from 15% in Q4 2017 to 44% in Q4 2018.

Comcast-owned video ad server FreeWheel had similar findings. In Q4 2018, FreeWheel served 42% of its ad impressions through connected TVs, which was a year-over-year increase of 11 percentage points.

That said, the rise in inventory is leading to a slight drop in pricing. According to three US buy-side sources who anonymously shared data with eMarketer, CPMs for in-stream ads on connected TV ranged from $19.84 to $28.33 between Q4 2017 and Q4 2018.