beIN prepares for Copa America Brazil 2019 | Pay-TV | News | Rapid TV News
By continuing to use this site you consent to the use of cookies on your device as described in our privacy policy unless you have disabled them. You can change your cookie settings at any time but parts of our site will not function correctly without them. [Close]

Qatar-based pay-TV broadcaster beIN Sports is to provide round the clock football programming to herald the Copa America Brazil 2019 on 14 June (or 15 June KSA time). 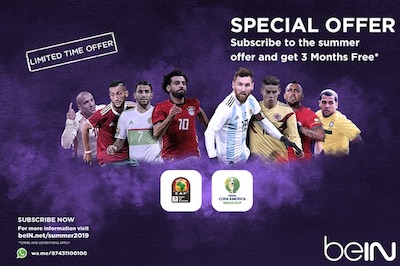 Running until 7 July, this Copa America will, for the first time, see AFC Asian Cup champions Qatar become the first Arab nation to compete in the tournament along with AFC Asian Cup runners up Japan.

beIN Sports' digital and social platforms will be sharing articles and stories on Qatar’s participation as well as documentaries on Copa America teams and matches by using the hashtag #beINCopa.

Live statistical and historical data will also be provided to subscribers during the matches, which take place across five cities and six venues in Brazil. Viewers will also have the opportunity to join in social media discussions surrounding the live games.
Tweet