Direct-to-consumer firms accelerate ‘significantly’ 2018 TV spend | Media Analysis | Business | News | Rapid TV News
By continuing to use this site you consent to the use of cookies on your device as described in our privacy policy unless you have disabled them. You can change your cookie settings at any time but parts of our site will not function correctly without them. [Close]

In a nascent form they may be, but direct-to-consumer (DTC) services are already having a huge effect on the media market according to a study from research and marketing company VAB. 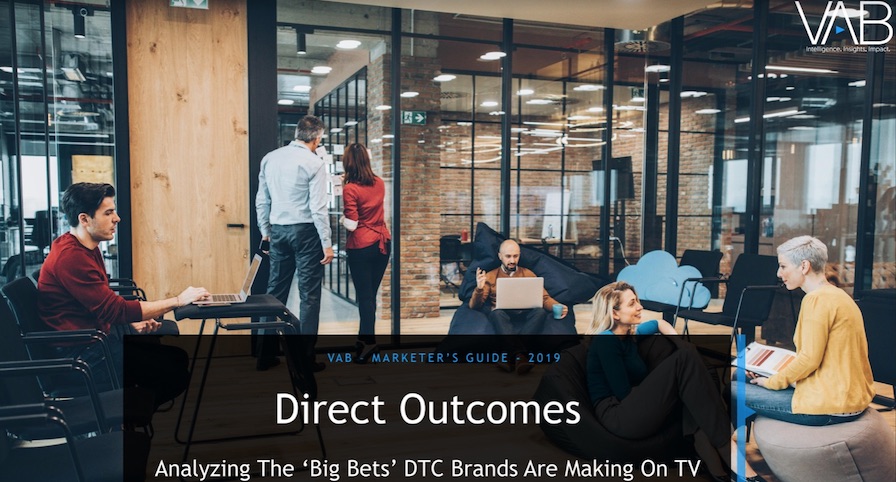 VAB defined DTC brands as a company selling its product directly to customers without third-party retailers, wholesalers or other middlemen. The 125 brands in 52 categories examined in 2018 for the Direct Outcomes: Analysing the Big Bets DTC Brands are Making on TV report represented VAB's largest analysis to date.

The DTC companies included in the analysis were classified as emerging, 63 brands in 34 categories or expanding, (62 in 31) based on similar characteristics . The emerging DTC brands were an average of eight years old and only began investing in TV within the last three years. Expanding brands were on average of 13 years old and have been investing in TV for at least four years (eight years on average).

The study found that in 2018 DTC providers collectively spent $3.8 billion on TV, a 60% increase in spending compared with 2017, adding $1.4 billion to the TV advertising marketplace over the year. This broke down to emerging spending over $1.4 billion on TV, a 167% increase compared with the previous year. Nearly two-thirds of the emerging brands were either new TV advertisers in 2018 or were existing advertisers that more than doubled their TV investment year-over-year.

Most emerging DTC brands saw double to triple-digit lifts in search queries and non-paid online video views related to their TV ads as they increased their investment .The report showed that the average emerging DTC brand also saw an immediate 84% surge in unique website traffic during their TV launch month, with monthly traffic continuing to grow an average of 93% from campaign launch month to present day. A sample of five emerging DTC companies purchasing TV advertising for the first time in 2018 saw revenue lifts of 25% to 800% over the prior year.

The survey also showed that even though the 62 expanding brands examined were more established and had higher brand recognition, they increased their investment in TV advertising. In 2018, these expanding DTC brands collectively spent nearly $2.4 billion on TV, a 29% increase over 2017, with many increasing their TV investment by double or triple-digits. Expanding brands collectively saw boosts of 24% in search queries and 95% in total non-paid online video views of their TV ads. Comparable to the emerging brands, the more established DTC brands also experienced revenue spikes when TV advertising spending was increased.

“DTC brand leaders will tell you their data is essential to their company and it drives all decisions,” said VAB president and CEO Sean Cunningham commenting on Direct Outcomes: Analysing the Big Bets DTC Brands. “The data collected and measured against customer activations and business outcomes from TV advertising campaigns has proven these DTC marketers not only made smart investments, but it also prompted them to reinvest in TV to continue driving growth. The 125 DTC advertisers featured in Direct Outcomes succeeded in producing mass consumer market disruption using premium video advertising and generated billions of dollars in sales for brands that didn't even exist several years ago.”