Champions league final breaks viewing records for BT in UK | Ratings/Measurement | News | Rapid TV News
By continuing to use this site you consent to the use of cookies on your device as described in our privacy policy unless you have disabled them. You can change your cookie settings at any time but parts of our site will not function correctly without them. [Close]

Liverpool’s triumph in the Champions League final on 1 June has set more viewing records, this time in the UK for rights holder BT Sport which has reported the Reds’ sixth victory in the competition drew 11.3 million viewers across digital and TV platforms. 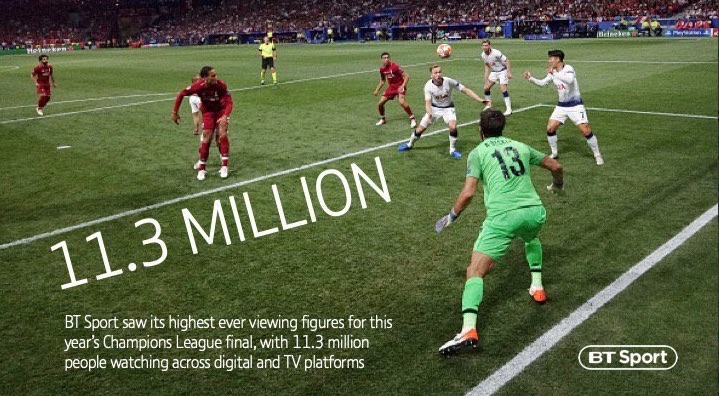 As has now become traditional since it gained UK rights to the competition, BT Sport made the Champions League Final available free for anyone in the UK to watch on TV, online or on mobile. The game was available for free on www.btsport.com/final, on the BT Sport YouTube channel and via the BT Sport app for devices including Xbox One, Samsung Smart TV and Apple TV and on the Virgin Media cable service. However perhaps most significantly, the action on the BT Sport App was available for the first time in high dynamic range (HDR).

Viewing data for the final released by BT showed that of the overall 11.3 million total, almost three million more than for 2018’s final between Liverpool and Real Madrid, 6.5 million watched on television and 4.8 million across the digital platforms.

“This season's Champions League and Europa League have been a great success for BT,” said BT marketing director Pete Oliver. “Both finals were of huge interest with four English teams competing, which has never been done before in the history of both tournaments and came at the end of a season featuring incredibly entertaining matches that captivated the nation.”