Univision Deportes delivers most-watched Champions League season | Ratings/Measurement | News | Rapid TV News
By continuing to use this site you consent to the use of cookies on your device as described in our privacy policy unless you have disabled them. You can change your cookie settings at any time but parts of our site will not function correctly without them. [Close]

Replicating the season that now six times winners Liverpool had on the pitch, Univision Deportes has revealed that nearly 22.2 million total viewers 2+ tuned in to all or part of its 91 UEFA Champions League (UCL) football telecasts. 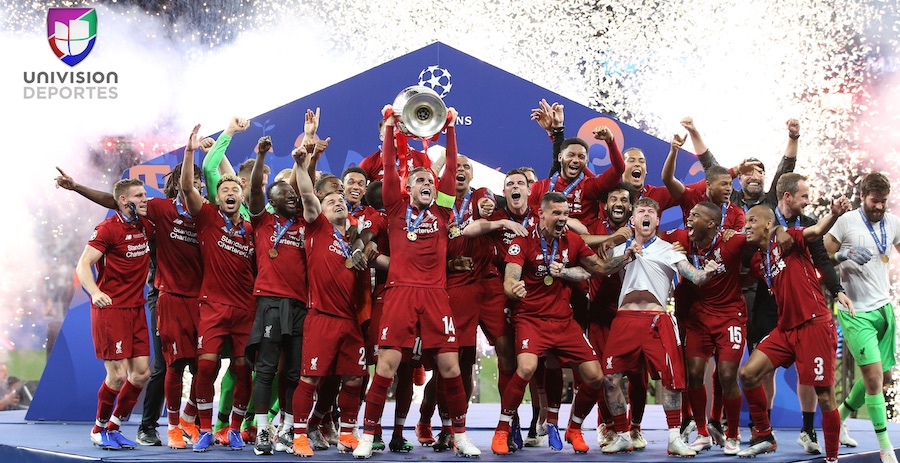 This made the 2018/19 competition the most-watched season on any network or in any language during Univision Deportes' inaugural run as the exclusive US Spanish-language television partner.

In total, Univision delivered three-fifths of the UCL television audience in the US, marking the first time since 2013-14 that the soccer league’s Spanish-language telecasts attracted a higher audience share than English-language.

The telecast of Liverpool’s triumph in the final against Tottenham delivered the largest final audience in Spanish-language since 2015 which saw Hispanic icon Lionel Messi’s Barcelona triumph over Juventus. The 1 June 2019 match, simulcast on UDN, reached nearly 4.0 million total viewers 2+ during the broadcast, and averaged 1.4 million total viewers and 732,000 for adults 18-49. Compared with last year’s telecast on ESPN Deportes — which also featured Liverpool but that time against Cristiano Ronaldo’s Real Madrid — Univision Deportes saw double-digit increases among total viewers 2+, up 34%, and adults 18-49 ,14%.

“We are proud of the success UEFA matches have had for Univision Deportes, and equally proud that we have helped to expose some of the most exciting soccer in the world to a larger audience,” said Juan Carlos Rodriguez, president of Univision Deportes. “This is further proof of the power and reach of Univision’s networks among fans of the beautiful game.”