ZEE5 unveils new genres for June content slate | Programming | News | Rapid TV News
By continuing to use this site you consent to the use of cookies on your device as described in our privacy policy unless you have disabled them. You can change your cookie settings at any time but parts of our site will not function correctly without them. [Close]

Ratcheting up its content offer, Indian digital video platform ZEE5 has announced a multi-genre slate of content, making forays into new genres including a stand-up comedy series and a sports drama series. 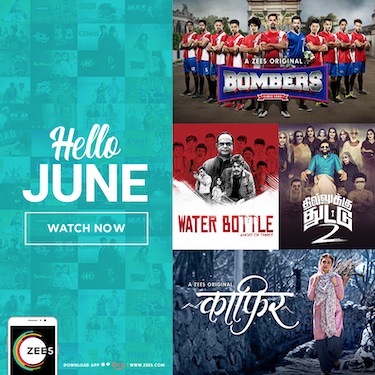 At the vanguard of the new bouquet is Comedy Shots which premieres on 7 June, featuring acts by Gaurav Kapoor, Anubhav Bassi and Rahul Dua among some of India’s best comic talent.

Premiering on 15 June is ZEE5 original drama Kaafir starring Dia Mirza and Mohit Raina. Inspired by a real-life story, the series follows the journey of a young Pakistani mother who comes into India under strange circumstances and is unable to go back home. Adding further to the original dramas are Postman (Tamil) and Water Bottle (Bangla).

The service’s debut sports drama series Bombers premieres on 22 June, and revolves around the story of the football league, Bombers FC and their journey to victory. It boasts a cast including Varun Mitra, Aahana Kumra, Prince Narula, Meiyang Chang and Anup Soni.

“We’ve got a great line-up this June with some very compelling stories like Kaafir and Bombers that have universal themes,” said ZEE5 Global chief business officer Archana Anand. “We’re also pushing the boundaries with new genres like stand-up comedy and sports drama that have tremendous appeal among our audiences in different countries. All this only underscores our commitment to bring our global audiences the largest range of multi-genre content, in the language of their choice.”