CBS, Tegna reach US affiliate deal | Broadcast | News | Rapid TV News
By continuing to use this site you consent to the use of cookies on your device as described in our privacy policy unless you have disabled them. You can change your cookie settings at any time but parts of our site will not function correctly without them. [Close]

CBS and Tegna have renewed their US broadcast affiliation agreement, with a multi-year deal covering TV stations in 11 markets. 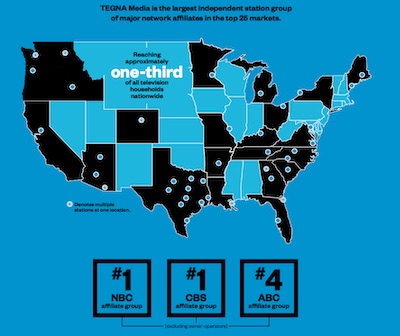 The deal means that programming from Tegna’s CBS affiliates is available to subscribers of CBS All Access, the company’s streaming subscription video-on-demand service.

“Tegna is a valued and long-time CBS partner,” said Ray Hopkins, president, television networks distribution for CBS. “We are pleased to extend this important relationship between America’s No 1 Network and an industry-leading local broadcaster. We look forward to continuing this great relationship delivering premium content to the viewers we both serve.”

The Tegna stations cover 10% of the US and about 11 million households – and Tegna’s not afraid to use its scale to negotiate deals. In January, mere days before the NFL playoffs started, Tegna television stations went dark on Verizon in the three US markets. The impasse was settled eventually.