Game 3 of the NBA finals hoops best OOH ratings for series yet | Ratings/Measurement | News | Rapid TV News
By continuing to use this site you consent to the use of cookies on your device as described in our privacy policy unless you have disabled them. You can change your cookie settings at any time but parts of our site will not function correctly without them. [Close]

Game 3 of the National Basketball Association (NBA) Finals in the US on ABC delivered its highest out-of-home (OOH) ratings for the tournament so far, according to Tunity Analytics. 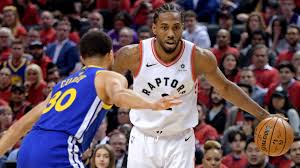 The numbers measure viewing that occurs in locations outside the home like restaurants/bars, gyms, offices and airport lounges. The matchup between the Golden State Warriors and Toronto Raptors on ABC averaged 7.2 million OOH viewers; that’s in contrast, Game 2 averaged more than 5.9 million OOH viewers.

Game 1 also delivered solid out-of-home (OOH) viewership numbers, according to Tunity Analytics – despite a decline from last year. It averaged more than 6.8 million viewers, according to the data; the audience skewed 80% male and 20% female versus last year’s 73%/27% split. Sixty-five per cent of viewers were in the adults 25-54 demo.