Chinese SVOD services break into global top-five | Media Analysis | Business
By continuing to use this site you consent to the use of cookies on your device as described in our privacy policy unless you have disabled them. You can change your cookie settings at any time but parts of our site will not function correctly without them. [Close]

Research from Ampere Analysis has revealed that despite the market being defined and led by US players, China now claims three of globe’s top five subscription video-on-demand services by subscriber numbers. 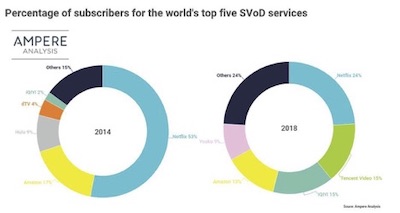 The analyst notes that since 2012 and amidst fierce competition, three major SVOD services — well-funded by their cash rich tech-giant parent groups and who are collectively known as BAT — have emerged and made a significant impact on the industry, namely Baidu-backed iQIYI, Youku-Tudou (backed by Alibaba), and Tencent Video. As a result said Ampere, ‘aggressive’ content investment and subsequent rapid subscription growth has meant that by the end of 2018, three of the top five subscription OTT services in the world – in terms of subscribers – were Chinese.

The analyst also observed that these services had recently altered their business models. After initially relying heavily on advertising revenues and supporting free streaming services, the leading services are now going towards ad-free paid subscriptions similar to the Netflix business model. Ampere calculates that by the end of 2018, the three leading Chinese streamers generated USD$8 billion in revenue, compared with Netflix’s $18 billion.

The research also showed that investments in content have enabled the big three SVOD services to build large content catalogues. Youku-Tudou leads with 13,000 titles, followed by iQIYI at 10,000, and Tencent Video at 7000. Service stacking is a common trend in China as a result of the original and exclusive content on offer. iQIYI offers 250 original and 1000 exclusive titles, while Tencent Video has 330 original and 1400 exclusive titles. According to Ampere’s Consumer Q1 2019 data, 44% of Chinese internet users subscribe to two or three SVOD services, and 16% to all three.

Ampere Analysis expects the continued growth of Chinese SVOD by the big three players as they continue to be buoyed by financial backing from the BAT firms and benefitting from a strict regulatory environment in China which prevents international players such as the FAANGs operating.

“We expect the big three SVOD players in China to continue growing and reach 340 million subscriptions and USD 12.6 billion in total a year by the end of 2024,” said Ampere Analysis analyst Orina Zhao. “Investing heavily in content will continue as the main strategy to drive subscriptions and increase user retention, in which process the strong financial backing from BAT is key.”