TV still the most beloved living room item | Media Analysis | Business | News | Rapid TV News
By continuing to use this site you consent to the use of cookies on your device as described in our privacy policy unless you have disabled them. You can change your cookie settings at any time but parts of our site will not function correctly without them. [Close]

Despite changing décor, family behaviour and streamed content taking a leap forward, the humble TV is still the heart of the living room. 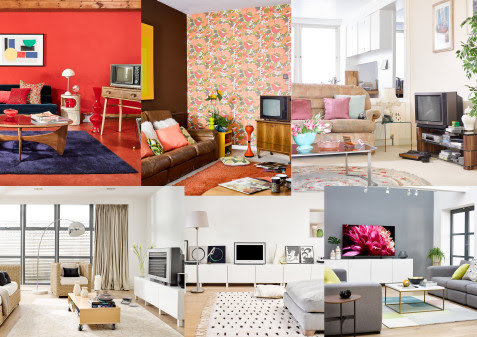 That’s according to Sony’s Evolution of the Living Room report. Informed by experts including Italian design duo Stefano Mich and Alessandro de Pompeis, Sonia Solicari the director of the Geffrye Museum of the Home and psychologist Emma Kenny, the report reveals how the living room has evolved to fit in with our modern-day lives and is centred around the TV, which has evolved with it.

A third (32%) of people in the survey said that the TV is the most important item in their living rooms, coming second only to the sofas they watch it on. This trend is showing no sign of slowing down either, as 64% of people said that they watch just as much or more TV now than they did ten years ago.

Also, despite people watching more TV than ever, with the average person watching over 15 hours a week, the prime-time hour is set to die out as a mere 6% of people always watch a TV show live, instead preferring to stream or watch on catch-up.

The report found that people now prefer streamed content over watching scheduled TV. Reasons given for this include the flexibility streaming offers rather than be restricted to the show on TV (50%), fitting programmes in around longer working hours (32%) and being able to watch with friends/or a partner (31%).

Despite the increase in popularity of portable devices, TVs are getting bigger, with over a third of people now wanting a TV over 55 inches and 16% desiring a 65+ inch set. Almost half (48%) of people want a bigger TV than the one they have now, but men are 10% more likely than women to want a bigger TV.

“This report provides an eye-opening and nostalgia-inducing look at how the living room has changed over the years,” said Takayuki Miyama, Sony head of TV product planning and marketing in Europe. “TV has clearly been a huge part of this, and Sony has been at the forefront of innovation through the years with its televisions and the introduction of the XG95 TV shows a key point in time.”