‘Terminal decline’ in DTH accelerates | Satellite | News | Rapid TV News
By continuing to use this site you consent to the use of cookies on your device as described in our privacy policy unless you have disabled them. You can change your cookie settings at any time but parts of our site will not function correctly without them. [Close]

The current haemorrhaging in direct to home satellite TV (DTH) subscriber numbers in North America is set to not just accelerate but also spread to Europe and eventually to the Far East according to new research from Rethink Technology. 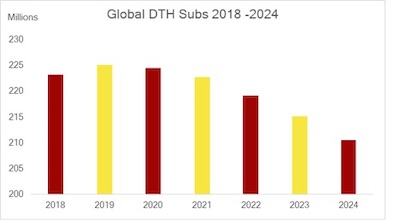 The report, Who Benefits As Global DTH Revenue Set To Shed $ Billions - Forecast to 2024, and it is part of the Rethink TV series of forecasts, sold by Rethink as a subscription service bleakly states that the decline in DTH will turn out to be terminal and began when cable TV started to churn around 2010, spreading to US satellite operators a few years later.

The analyst adds that the exodus is gathering speed and starting to spread to Europe, leaving operators scrambling to mop up departing customers via low-ARPU OTT. This, says Rethink, makes it impossible to maintain existing high ARPUs at historical levels, and noted that ‘the wheels have just come off’ for AT&T in the US as DirecTV Now, its stand-alone OTT offer is seen as an alternative to the main DTH service. Both have now been losing subs after initial gains.

The study does point out that DTH continues to thrive where there are no competitive alternatives for premium content, or where one operator has hogged the most sought-after sports rights. It adds that in some parts of the world, notably India, DTH continues to provide an engine of growth for pay-TV for a short while anyway.

Looking at regions, the report observed that in Europe the decline is well advanced for some operators such as France’s Canal+, whose base will likely be halved by 2024 from 2018. Some Eastern European markets have profiles more like developing countries, most notably Cyfrowy Polsat in Poland, set to continue gaining subs for at least the next few years. However, even these operators will run out of rope towards the end of the forecast.

In its report, Rethink predicts that in Asia Pacific DTH subscriber growth will be sustained throughout the period but with signs of flattening later around 2024. It anticipates some Asia Pac operators that are still growing subs now will reach a turning point during the forecast period with decline setting in just before 2024.
Tweet