Content sources proliferate for US consumers | Media Analysis | Business
By continuing to use this site you consent to the use of cookies on your device as described in our privacy policy unless you have disabled them. You can change your cookie settings at any time but parts of our site will not function correctly without them. [Close]

US consumers are becoming more and more overwhelmed by the proliferation of TV providers and content, especially when it comes to OTT services. 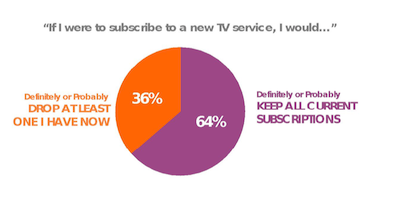 A full 70% percent use at least one of the Big 3 (Netflix, Hulu or Amazon) – the same as last year. But the number who use more than one has risen seven percentage points.

Meanwhile, content overload will play a bigger role in whether consumers adopt new services (or keep the ones they have now). About a quarter (24%) say that “they already have too many TV services” and don’t intend to subscribe to new ones—up from 14% in 2018.

And more than a third (36%) say that before they sign up for anything new, they’d cancel an existing platform

“The TV landscape is approaching zero-sum status, with more consumers insisting they’d drop an existing service before adding a new one,” said Peter Fondulas, principal at Hub and co-author of the study. “That puts added pressure on all TV services – including those on the way from Disney, Apple, and WarnerMedia—to offer the type of value that consumers feel they can’t live without.”

“Viewers are watching content from more sources than ever,” said Jon Giegengack, also a co-author of the study. “That raises the bar for new platforms entering the market – but it’s a growing opportunity for platforms that can aggregate content from multiple sources. For consumers, simplicity is becoming a more important factor to consider.”