Sony 8K TVs slated to hit European market in June | 4K/UltraHD | News | Rapid TV News
By continuing to use this site you consent to the use of cookies on your device as described in our privacy policy unless you have disabled them. You can change your cookie settings at any time but parts of our site will not function correctly without them. [Close] 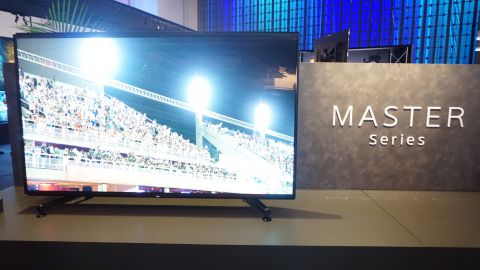 They both feature the latest generation Picture Processor X1 Ultimate processor; it has a unique algorithm developed for 8K that can intelligently detect and analyse each object in the picture, Sony said.

The ZG9 models also feature the new Sound-from-Picture Reality audio technology, which faithfully reproduces the position of the sound on the screen so when actors are speaking, the sound appears to be coming directly from their mouths and not from a speaker off to the bottom of the TV. To deliver that, the Acoustic Multi-Audio technology on the ZG9 utilises four front-facing speakers; two on the bottom and two on the top. In addition, the ZG9 has a TV Centre Speaker Mode for those who have a home cinema setup – the TV becomes the centre speaker. Also enhancing the sound experience is Dolby Atmos 2.

In addition, Sony developed completely new dedicated 8K technologies for the ZG9 series, including Backlight Master Drive with full-array local dimming and 8K X-tended Dynamic Range PRO. The Backlight Master Drive on the ZG9 has ultra-dense LED modules which are independently controlled, delivering contrast with brightness and pitch blacks. To leverage the most out of this backlight system, 8K X-tended Dynamic Range PRO uses the saved energy to intelligently boost the brightness in the areas where it needs to be boosted.

Also on board is X-Wide Angle to ensure the picture retains its quality and true colours regardless of the viewing angle by reducing colour shifts when viewing the screen off-axis. Also, X-Motion Clarity minimises motion blur; and the TVs feature integrated Netflix Calibrated Mode and IMAX Enhanced1.

The operating system is Sony Android TV which supports a wide range of apps from Google Play, including YouTube, Netflix, Prime Video and more; the voice-activated Google Assistant is also built-in.