US advertisers embrace advanced advertising methods | Ad Tech | News | Rapid TV News
By continuing to use this site you consent to the use of cookies on your device as described in our privacy policy unless you have disabled them. You can change your cookie settings at any time but parts of our site will not function correctly without them. [Close]

US advertisers will spend $70.83 billion on TV this year, according to numbers from eMarketer and while the vast majority of TV advertising is still bought and sold through traditional methods, change is happening, according to the firm. 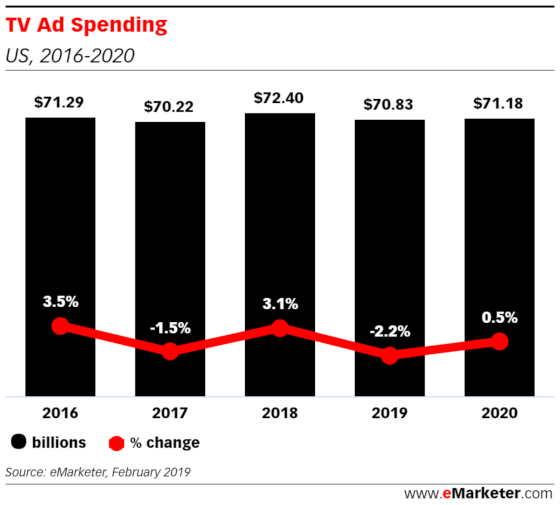 “Advanced TV inventory is a confusing, convoluted landscape and marketers are looking for partners that can help navigate the space,” said Sarah Scherer, product marketing manager at programmatic agency Goodway Group. “If a demand-side platform [DSP] doesn’t have a solution, they will likely lose.”

eMarketer estimates a 58.4% increase in US programmatic TV ad spend this year, to reach $2.77 billion. And addressable TV ad spending in the US will increase 23.3% in 2019 to $2.54 billion, as TV ads become more targeted.

Another growth area is connected TV advertising, which includes ads served to TV sets via the internet, be it via a smart TV or another device such as a Blu-ray player, game console or set-top box, such as Roku or Google Chromecast.

The firm also predicts that 57.2% of the US population will watch connected TV in 2019, up from 51.7% in 2017. And Nielsen estimates that between Q4 2017 and Q1 2018, the average amount of time that people spent watching content on connected TV devices increased by minutes minutes per day, to reach 40 minutes.