Guinness PRO14, StreamAMG announce OTT first for rugby union | OTT | News | Rapid TV News
By continuing to use this site you consent to the use of cookies on your device as described in our privacy policy unless you have disabled them. You can change your cookie settings at any time but parts of our site will not function correctly without them. [Close]

The Guinness PRO14 rugby union organisation is claiming to have become the first major competition to launch its own streaming platform in it calls ‘ground-breaking’ partnership with OTT and VOD solutions provider StreamAMG. 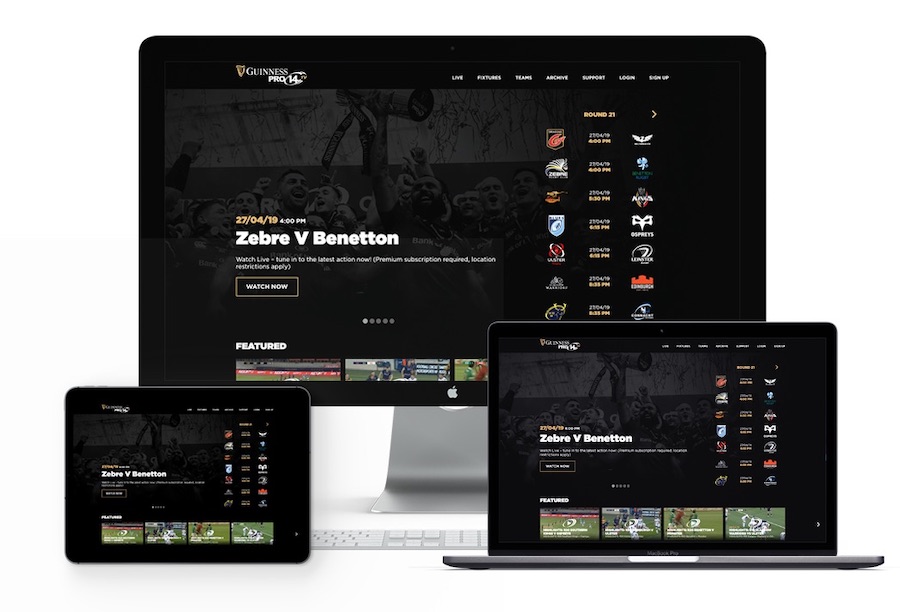 The Guinness PRO14 Championship is made up of 14 clubs – four Irish, four Welsh, two Scottish, two Italian and two South African teams – who compete in two conferences to reach the Quarter Finals, Semi-Finals and Final. The current championship holders are Leinster, who are also the most successful side in the competition’s history with five title wins to their name. Every season since 2010-11 has seen aggregate attendances top a million, with audiences of millions watching on television around the world.

After major world-wide broadcasts were unveiled by the Championship earlier this season, supporters in selected international territories will now also be able to watch all the action from across the Championship live via an official Guinness PRO14 direct-to-consumer platform.

The service will be based on StreamAMG’s MediaPlatform video management platform as well as incorporating CloudMatrix, a new feed-based distribution platform. StreamAMG’s proprietary transaction platform, CloudPay, will take care of end-user payments and subscription management.

“Launching our own OTT video platform to reach fans around the world was a logical next step for us as we experience more demand for the Guinness PRO14 than ever before,” said Dermot Rigley, commercial director of PRO14 Rugby. “To be the first major rugby union tournament to launch an OTT service is in keeping with our commitment to innovation and a commitment to embrace new technologies. Since expanding the Championship into South Africa in 2017 we have experienced significant growth across all metrics including attendances, social media engagement and, of course, signing record-setting broadcast deals earlier this year.

StreamAMG chief executive officer Duncan Burbidge added: “To be able to work with a top-flight sporting property in the form of Guinness PRO14 is a real honour for us. Our team is relishing the opportunity to bring their technical expertise and sporting expertise to bear in the delivery of a best-in-class OTT proposition.”

After what it claims was successful streaming of Guinness PRO14 games on social media to selected territories, an expected audience has already signed up to the very first to access PRO14 TV. The service launches in time for the climax of the season – the Guinness PRO14 Finals Series. The service is now available at www.pro14.tv and fans will be able to choose from a range of packages including pay-per-view passes for individual games at €3.99, with a weekend pass available for €6.99.
Tweet