Video, TV services fail to grab total attention of viewers | Media Analysis | Business
By continuing to use this site you consent to the use of cookies on your device as described in our privacy policy unless you have disabled them. You can change your cookie settings at any time but parts of our site will not function correctly without them. [Close]

The multiscreen evolution has driven many positive effects for the TV and video industry but capturing full command of the viewing audience in the US isn’t one of them according to research released by eMarketer. 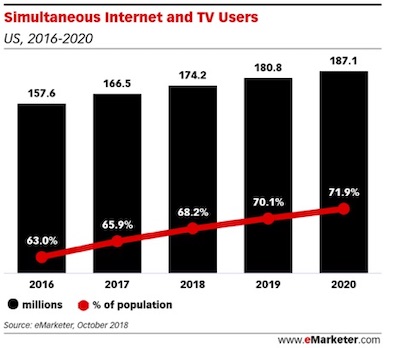 Citing a study from CivicScience, found that 48% of adults in the US engage with a second screen (smartphone, tablet or laptop) while watching their favourite shows and movies on TV, compared with 38% who do not. The remaining 13% either don’t watch TV, don’t own a smartphone, tablet or laptop, or they watch video only on mobile devices. CivicScience also found that Netflix and Amazon Prime Video users are actually more likely to use a second screen than nonsubscribers

The study forecasts that by the end of 2019, forecast 180.8 million US adults will be two-screen viewers, meaning that 70.1% of the adult population will use a computer or mobile device to browse online while watching either digital video or traditional TV.

eMarketer noted that the increasing simultaneous users of internet and TV—an audience that it estimates has grown by 32.3 million in the past five years—could be an opportunity for marketers to reach subscription video-on-demand (VOD) users who don’t see ads while watching video.

Yet eMarketer cautioned that of the 48% who browse online while watching content, CivicScience found 23% view mobile apps, games or other content that isn’t related to what they are watching on their main screen. A further 18% either texted or checked email, and only 7% said they view or engage with content related to the programme they’re watching.