BGM drums up Backyard Beats win as Ricky Rocket takes off with BBC | Deals | News | Rapid TV News
By continuing to use this site you consent to the use of cookies on your device as described in our privacy policy unless you have disabled them. You can change your cookie settings at any time but parts of our site will not function correctly without them. [Close] 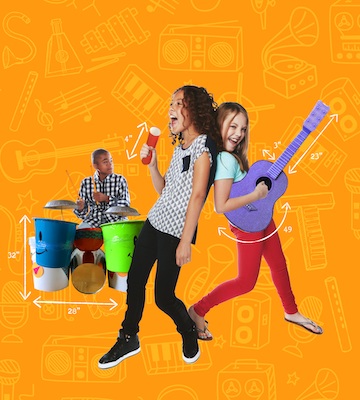 The 26 x 11 mins Backyard Beats, billed as a fun-filled fusion of music and crafting, is aimed at six- to nine-year-olds and explores music from all angles, from eclectic genres through intriguing’ instruments to inspiring musicians. Each episode also features a host-led DIY segment, in which kids are challenged to ‘get with the beat’ by building a musical instrument using everyday household items.

Backyard Beats is slated for a 2020 broadcast slot on TVOkids and will also be available for streaming on TVOkids.com. The show was greenlit by TVOkids’ director Marney Malabar, who will also executive produce the series for the broadcaster. Daniel Bourré, Sean Connelly, Marlo Miazga will act as executive producers for BGM.

Music is also at the core of a new co-development agreement between BGM’s fledgling kids’ division and the BBC on animation project Ricky Rocket.

Developed for the ‘bridge audience’ of five- to seven-year-olds, Ricky Rocket follows the musical adventures of Ricky and his friends, Alex and Logan. In between performing in their band, the three boys morph into superheroes to save their hometown of Galaxy City from disaster. Ricky has a special superpower: his rocket-powered wheelchair. He’s always ready to roll into action and prove how an ordinary kid can do extraordinary things — with a little help, a lot of heart and a can-do attitude.

“BGM is committed to reflecting the brilliance, creativity and diversity of the world around us to delight and inspire young audiences,” said BGM president and CEO Julie Bristow commenting on the two deals. “This latest series commission from TVOkids is a testament to the quality of the entertainment coming out of our newly launched kids’ division — and to have won the support of the BBC in developing our first animated show is also a major coup. Both Backyard Beats and Ricky Rocket tap into the joy of making music from anything at any time, wherever and whoever you are.