Ultra HD channel growth remains stubbornly sluggish | 4K/UltraHD | News | Rapid TV News
By continuing to use this site you consent to the use of cookies on your device as described in our privacy policy unless you have disabled them. You can change your cookie settings at any time but parts of our site will not function correctly without them. [Close]

Despite the fact that 4KTV set shipments is growing at a fair pace across the world, there is still limited choice in the amount of Ultra HD channels available to run on them says research from IHS Markit. 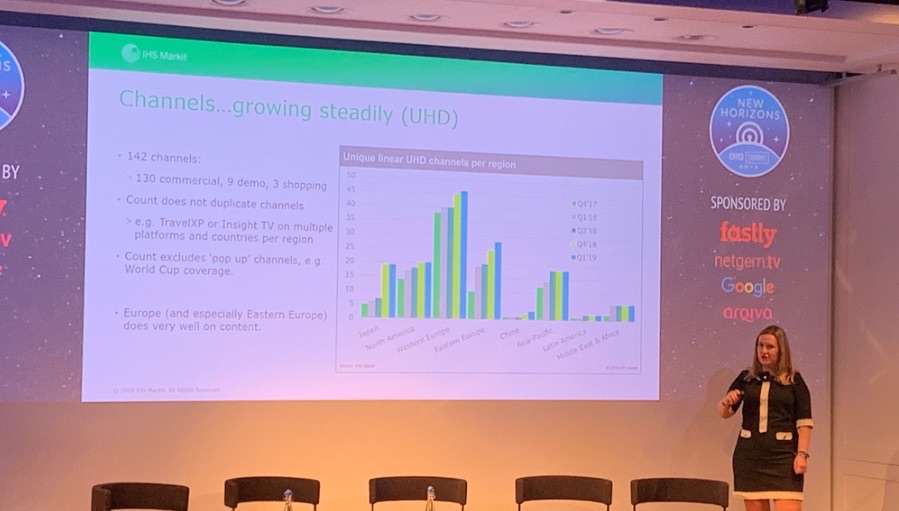 Speaking at the DTG Summit in London, IHS Markit principal analyst/researcher Paul Gray noted that by in the fourth quarter of 2018, over half of the TVs shipped worldwide were of 4K resolution, an amount rising to 63% in Western Europe.

In the latter territory the UK was leading adoption and the analyst calculated that on average by 2023 there would be far more UHD households in the country than in Western Europe (46%) as a whole. A key factor that could hold back the 4KTV market growth in the UK was small homes limiting UK screen size growth.

Looking at how theses sets are seeing use, and will do so in future, executive director of media, service providers and platforms at IHS Markit, Maria Rua Aguete, revealed that at present there were 142 channels: 130 commercial, nine demo and three shopping. The IHS Markit research does not duplicate channels, such as TravelXP or Insight TV on multiple platforms and countries per region. It also does not include ‘pop up’ channels such as those that appeared during coverage of the 2018 World Cup.

The analyst found that on content Europe (and especially Eastern Europe) did very well overall. Yet when it came to who would be offering UHD channels, the analyst noted there were only a small number of players in each of the major countries. It found that in South Korea there were currently only six operators offering linear pay-TV UHD channels and five in the Netherlands. Yet even in the US this number was only two, the same as in Japan, Germany and the UK.
Tweet