Eutelsat 7C pre-launch preparation near complete | Satellite | News | Rapid TV News
By continuing to use this site you consent to the use of cookies on your device as described in our privacy policy unless you have disabled them. You can change your cookie settings at any time but parts of our site will not function correctly without them. [Close]

Leading satellite operator Eutelsat has reported that a crucial stage has been completed in the production of its high-power broadcast craft EUTELSAT 7C which will serve markets across Africa, Europe, the Middle East and Turkey. 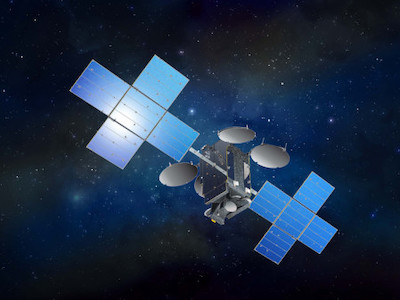 Equipped with 49 36-Mhz equivalent Ku-band transponders, EUTELSAT 7C will be co-positioned with EUTELSAT 7B at 7° East, increasing capacity at this neighbourhood by 19 transponders for the dynamic market Africa. EUTELSAT 7A will be transferred to another orbital location as part of Eutelsat’s ongoing fleet optimisation.

As part of the environmental testing completed in early February 2019, the all-electric satellite, manufactured by Maxar Technologies, was subjected to
conditions simulating the launch and space environment in orbit.

With the loading of the spacecraft tanks with Xenon propellant now finalised, the satellite is currently undergoing final preparation operations ahead of shipment to the Arianespace launch site in Kourou, French Guiana, where it is due to be launched as a co-passenger on an Ariane 5 rocket before the end of June.
Tweet