Video to account for almost half of programmatic spend in 2019 | Ad Tech | News | Rapid TV News
By continuing to use this site you consent to the use of cookies on your device as described in our privacy policy unless you have disabled them. You can change your cookie settings at any time but parts of our site will not function correctly without them. [Close]

Video to account for almost half of programmatic spend in 2019

A tipping point in US advertising is nigh according to eMarketer which predicts that marketers will spend $29.24 billion in 2019, accounting for 49.2% of all US programmatic digital display ad revenues. 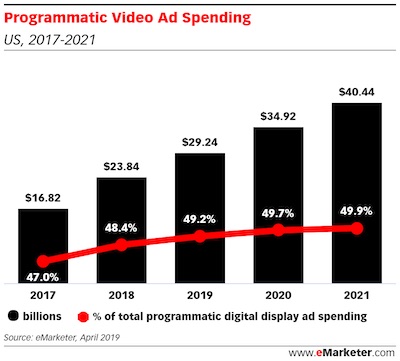 eMarketer includes the majority of social video in its definition of programmatic video as, it noted, platforms like Facebook, Twitter and Snapchat allow advertisers to transact via programmatic direct ad manager tools.

Within programmatic video, eMarketer observed, dollars allocated to mobile devices edge out dollars given to desktop, laptop or connected TV only slightly this year. It calculates that mobile’s share of programmatic video will peak in 2020 at 53.9%. By 2021, that is projected to fall as ad buyers ramp up investments in areas such as connected TV.

“The near 50-50 split of spending is an indicator of how eager buyers and sellers have become to capitalise on video advertising in any and all forms,” said eMarketer principal analyst Lauren Fisher. “And it also speaks to how quickly both sides have embraced programmatic as the primary method for buying and selling these ads.”