Motorsport.tv adds new premium live racing to schedules | OTT | News | Rapid TV News
By continuing to use this site you consent to the use of cookies on your device as described in our privacy policy unless you have disabled them. You can change your cookie settings at any time but parts of our site will not function correctly without them. [Close]

Motorsport and automotive video destination Motorsport.tv has two additions in the form of King of the Roads, covering British and Irish motorcycle road racing, supported by live coverage of the Japanese Super GT Championship. 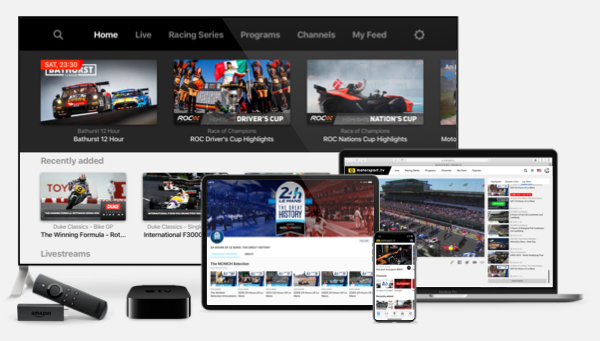 Motorsport.tv is the Motorsport Network's OTT video streaming service, and allows subscribers access to over 125 series, 1,000 live events as well as upwards of 3,000 hours of on-demand content across the entire motorsport spectrum.

King of the Roads is an all-new Motorsport.tv series that sets out to capture the very best of the world’s leading motorcycle road races across the UK and Ireland. The series will feature a varied package of live race broadcasts and extended highlights of 10 events, spanning some of the jewels of the British and Irish road racing season, including the North West 200, the Ulster GP, the Southern 100 and the road races from Armoy and Oliver’s Mount. The series is brought to a climax with Motorsport.tv’s coverage of the legendary invite-only Macau GP in November.

Japanese Super GT Championship coverage will comprise a free-to-air live service, exclusive in 32 countries across the Americas, Europe and the Russian Federation, together with non-exclusive rights across much of the rest of the world. The series is home to the talents of former Formula 1 World Champion, Jenson Button and the current WEC championship leader and former Williams pilot, Kazuki Nakajima. With seven races to come, commencing with the Fuji GT 500 with streaming beginning at 0520hrs GMT/0720hrs CET on 4 May, the series is a showcase of Japanese racing hosted at fabled venues from Suzuka to Motegi, contested between Japan’s automotive powerhouses - Lexus, Honda and Nissan.