Cobra Kai takes global top digital series spot | Ratings/Measurement | News | Rapid TV News
By continuing to use this site you consent to the use of cookies on your device as described in our privacy policy unless you have disabled them. You can change your cookie settings at any time but parts of our site will not function correctly without them. [Close] 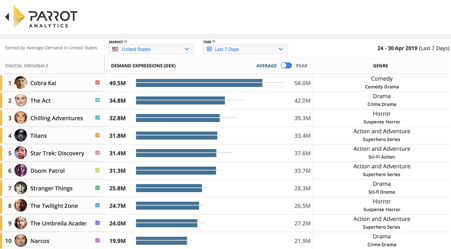 A Karate Kid sequel that picks up decades after the original film, Cobra Kai is also the most in-demand digital original in the United States during this same seven-day period; demand was 41% higher than The Act (Hulu), which came in second.

Season 2 of Cobra Kai premiered 24 April 24 and in just three days, the second season was already 136% more in demand than Season 1 in the same three-day time period in the US.

Compared to other linear and digital TV shows, season 2 of Cobra Kai generated more US demand seven days after premiere than the season 2 debuts of The Handmaid's Tale (Hulu), The Marvelous Mrs. Maisel (Amazon) and Atlanta (FX) during the same period.

"Clearly the second season of Cobra Kai is off to a really successful start," said Samuel Stadler, VP of marketing at Parrot Analytics. "Our seven-day data snapshot shows Cobra Kai is not only the most in-demand digital original in the United States right now, it is also the most in-demand digital original in the world. This is a phenomenal result and shows that the story and characters really resonate on a global scale."

The news comes as the premiere of the eighth and final season of Game of Thrones achieved the official title for most in-demand TV premiere of all time.