Magewell debuts flexible 4K broadcast card | 4K/UltraHD | News | Rapid TV News
By continuing to use this site you consent to the use of cookies on your device as described in our privacy policy unless you have disabled them. You can change your cookie settings at any time but parts of our site will not function correctly without them. [Close] 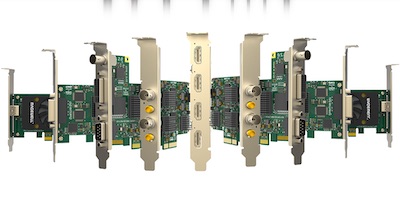 Single-link, 12Gb/s SDI provides a solution for professional 4K transport using just one cable per source, but many 4K products still offer only quad-link or dual-link connectivity. With support for all three methods, the Pro Capture Dual SDI 4K Plus card provides compatibility with both the latest and earlier 4K architectures and equipment.

The Pro Capture Dual SDI 4K Plus captures two channels of video at resolutions up to the 4096x2160 4K digital cinema specification, including the 3840x2160 Ultra HD (UHD) TV standard. Both inputs can be used simultaneously with independent resolutions, frame rates, processing settings and SDI connectivity standards. Each input source – including video and SDI-embedded audio – can be routed to multiple software applications in parallel, again with varying capture parameters for each programme.

“The flexible connectivity of our single-channel 4K SDI cards has been a popular feature with systems integrators and OEM partners wanting to maximise their compatibility with Ultra HD source equipment, as well as production professionals using a mix of equipment types that don’t always have 12G-SDI,” said Amy Zhou, sales director at Magewell . “We are pleased to offer the same benefits in a dual-channel configuration, providing outstanding capture density for customers working with multiple 4K sources.”
Tweet