APOS 2019: iflix partners Malaysia’s Media Prima | VOD | News | Rapid TV News
By continuing to use this site you consent to the use of cookies on your device as described in our privacy policy unless you have disabled them. You can change your cookie settings at any time but parts of our site will not function correctly without them. [Close] 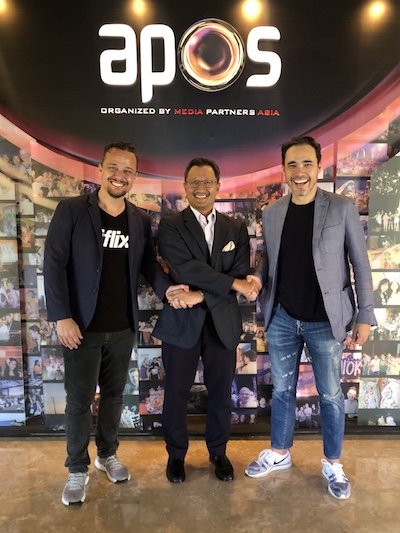 From June 2019, Media Prima’s content will be available to stream on a tonton branded segment on iflix just one hour after its linear TV broadcast. In addition, more than 1,000 hours of library content from Media Prima will beavailable on iflix, significantly boosting its Malaysian video offer.

The partnership builds on previous collaboration by the two parties, including the successful catch-up run of the hit drama Nur 2  through Media Prima’s Primeworks Studios. It also includes plans for the commissioning of new content and drama co-productions with iflix.

“This alliance is a significant milestone and another considerable boost to iflix’s local content offering. Over the past three months, we have accelerated the pivot away from Western towards local and regional programming, to deliver the most relevant and compelling content to users in our territories for free,” said Mark Britt (pictured, left), co-founder and group CEO, iflix.

“A strategic partnership of this scale with a progressive partner like Media Prima builds upon the strengths of both our organisations to provide viewers across Asia with the best possible entertainment experience. We look forward to building on this partnership,” he added.

“The inclusion of tonton, Malaysia’s most-watched video streaming platform, in iflix is a testament to the Group’s intent while providing their users with the best local content available. We look forward not only to share our content with iflix but also to develop and curate award winning content for the platform.”

That strategy has allowed Media Prima to expand its digital reach in line with the growth in digital advertising, Ishak added.
Tweet