APOS 2019: Viu commits to creating Asian originals | VOD | News | Rapid TV News
By continuing to use this site you consent to the use of cookies on your device as described in our privacy policy unless you have disabled them. You can change your cookie settings at any time but parts of our site will not function correctly without them. [Close] 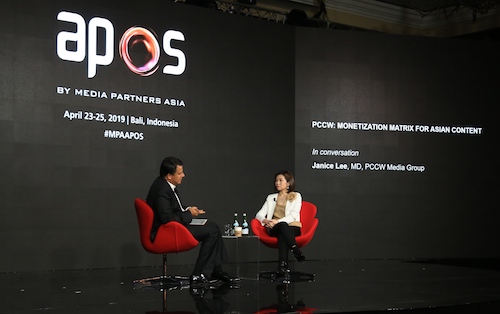 Viu’s original slate will include productions from Hong Kong, Malaysia, Thailand, Indonesia, India, the Philippines and the Middle East, the company announced at the APOS conference in Bali.

The video-on-demand (VOD) platform is to release two originals from Malaysia: Baha Don, directed by Kye Syed Fariz and Kopitiam, based on an award-winning television sitcom. In addition, The Grill (India), a series about the mis-adventures of an engineering college fresher; and The Zodiac (Middle East), a crime thriller based on a novel by Dr Ahmed Khalid Tawfiq will make up the latest slate.

“Learning from what our 30 million Viu-ers enjoy watching, we have further developed Viu Original portfolios which attracted significant growth of new users to the service. In 2018, 30% of Viu Original viewers were new to the platform,” said Janice Lee, managing director, PCCW Media.

“We plan to continue investing in original content by working with local talent and the creative industry in the region with an aim to releasing over 80 titles in 2019. The Viu Original series also allows us to experiment with different creative formats and push for more innovation in production and partnerships in the industry,” she added.

The new titles follow existing Viu originals such as The Publicist (Indonesia), The Bridge (Malaysia) and the recently launched No Sleep No FOMO (Singapore/pan-Asia) and 4Feaks 4Fam (Thailand).

The social media posts of celebrity travelogue No Sleep No FOMO have now generated more than one million social engagement and reached over 14 million users. The show’s success has resultedin a new tie-up with Discovery to reach an even wider audience.

“We are delighted with our new collaboration with Discovery proving that our original content is not only made for online consumption, but also having an audience no matter what platform you are on,” added Lee.

Viu said its monthly active users nearly doubled in 2018 to 30 million and video consumption time increased by close to 120% over the previous year.

As well as ever popular Korean dramas, Viu now carries Japanese, Chinese, Thai, Indonesian and Arabic content through partnerships such as with GMM and Workpoint in Thailand, Media Prima in Malaysia and Media 7 in Myanmar, as well as via its own Viu Original.
Tweet