4K 4Charity races past $1MN at NAB 2019 | 4K/UltraHD | News | Rapid TV News
By continuing to use this site you consent to the use of cookies on your device as described in our privacy policy unless you have disabled them. You can change your cookie settings at any time but parts of our site will not function correctly without them. [Close]

The 4K 4Charity Fun Run held on 9 April at the 2019 NAB Show has broken records for participants and has now seen cumulative gross proceeds exceed more than $1 million. 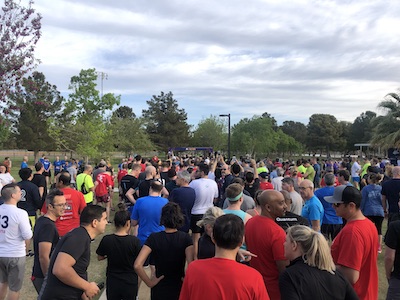 Organised by AWS Elemental, an Amazon Web Services (AWS) company, the 4K 4Charity Fun Run Series is a 2.49 mile/4 km running and walking event held at the NAB Show in Las Vegas, IBC in Amsterdam and Portland, Oregon. It aims to raise awareness and financial support for global and local non-profit causes that support increased diversity and inclusion initiatives.

The NAB 2019 run saw more than 735 individuals registered and raised more than $68,000 for Girls Who Code, a national non-profit organisation working to close the gender gap in technology and to change the image of what a programmer looks like.

“Thanks to the commitment and generosity of sponsors and individual registrants alike, more than $1 million in proceeds are being put to work today to help people marginalized by our society and educational systems find opportunities for success,” said Laura Barber, co-founder of the 4K 4Charity Fun Run Series. “With your on-going support, we are enriching our industry by making it better for everyone.”

The next 4K 4Charity event will be held on September 14, 2019, during the IBC Show in Amsterdam. More details and contact information for potential sponsors are available at https://4k4charity.com/ibc
Tweet