SpaceX launch Arabsat 6A with Falcon Heavy | Satellite | News | Rapid TV News
By continuing to use this site you consent to the use of cookies on your device as described in our privacy policy unless you have disabled them. You can change your cookie settings at any time but parts of our site will not function correctly without them. [Close]

SpaceX has successfully launched Saudi Arabia’s Arabsat 6A satellite in its first commercial Falcon Heavy mission, and pulled off a triple booster landing at Cape Canaveral in Florida. 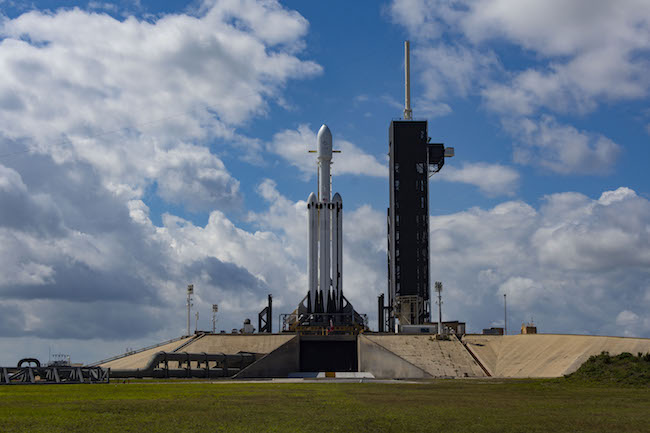 The broadcast and communications satellite, manufactured by Lockheed Martin, will be placed in orbit at 30.5 degrees East.

"Arabsat-6A is a high-capacity telecommunications satellite that will deliver television, radio, Internet, and mobile communications to customers in the Middle East, Africa, and Europe. Built by Lockheed Martin, Arabsat 6A is the largest and most powerful commercial satellite Lockheed Martin has ever produced,” said Khaled bin Ahmed Balkheyour, president & CEO of Arabsat.

Arabsat 6A will provide advanced Ka-spot beam communications services and Ku and Ka-band coverage for customers across MENA and parts of Europe.

The flight of SpaceX’s megarocket, which essentially comprises three of the company’s Falcon 9 rockets strapped together, came over a year after the rocket’s demonstration mission. That propelled a Tesla car owned by SpaceX founder Elon Musk and a manakin named Starman into orbit around the sun.
Tweet