American cord-never community grows to over 30 MN | Media Analysis | Business | News | Rapid TV News
By continuing to use this site you consent to the use of cookies on your device as described in our privacy policy unless you have disabled them. You can change your cookie settings at any time but parts of our site will not function correctly without them. [Close]

Even though the focus to date on declining US pay-TV subscriptions has been on cord-cutting, research from MRI-Simmons has revealed that a growing number of Americans have never paid for a traditional TV connection. 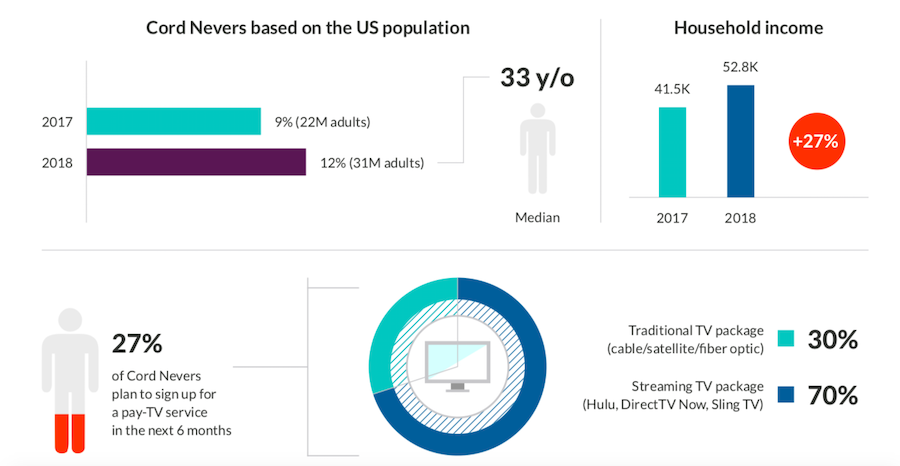 The Cord Evolution insights research — based on roughly 24,000 in-person, in-home interviews in MRI’s Survey of the American Consumer campaign, asking about cord intentions — found that reveal that roughly 31 million US consumers, representing 12% of the adult population are cord-nevers. This is three percentage points higher than that recorded in 2017. And indicating the purchasing power of the cohort, the survey also revealed that with a median age of 33, the typical cord-never’s average household income has risen by 27% over the last 2 years, from $41,500 to $52,800.

Among cord-nevers., 27% – about 8 million adults – said they plan to sign up for a pay-TV service in the next six months. Some 70% of these so-called cord seekers say they will subscribe to a traditional (cable, fibre optic, or satellite) service, while 30% – including 41% of 18–34 years olds – expect to acquire a streaming TV package, such as Hulu with Live TV, DirectTV Now, or Sling TV.

Trying to explain why millions of cord-nevers looking to connect to pay-TV service, MRI-Simmons noted that the reasons vary dramatically by age. It added that the option to channel surf is a big motivator for those in the 35–49 and 50+ groups, while the youngest adults (18–34) are seeking access and the ability to watch and find shows easily.

“Young people used to say that, as soon as they got their first well-paying job, they would sign up for the full suite of traditional TV services,” said Karen Ramspacher, SVP innovations and insights at MRI-Simmons. “Today, there are many more options for connecting to TV and video content – so competition for these subscription dollars is fierce. As they grow in numbers and wealth, today’s cord- nevers definitely represent an opportunity for content providers – but understanding the nevers’ underlying motivations is essential to targeting them effectively.”