Big data sees most SVOD originals cancelled after two seasons | Media Analysis | Business | News | Rapid TV News
By continuing to use this site you consent to the use of cookies on your device as described in our privacy policy unless you have disabled them. You can change your cookie settings at any time but parts of our site will not function correctly without them. [Close]

The discourse surrounding subscription video-on-demand has traditionally concentrated on the big winning series which are eagerly renewed but research from Ampere Analysis suggests that most streaming series have an average lifespan of two seasons. 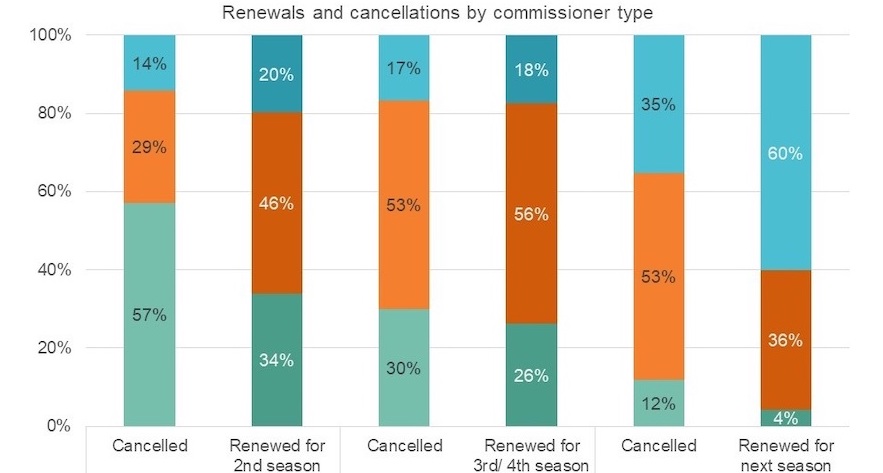 At the heart of this trend said the analyst was big data whereby detailed analytics are giving broadcasters with more information than ever before to make their renewal and cancellation decisions. Ampere’s analysis of renewals and cancellations across 61 shows between September 2018 and March 2019 found that of all the companies using such knowledge, streamers have been the most ruthless, with their commissions struggling to make it beyond a second series.

Interestingly, at four seasons, lifespan is longer on a cable network, while the longest-running shows exist on the free-to-air channels, where a series can expect an average of 6.5 seasons before getting axed.

VOD services posted the lowest number of seasons with cancellations coming after an average of 2.1 seasons. Netflix accounts for 68% of VOD cancellations in the USA with 12 of its13 cancellations since September 2018 occurring at three seasons or lower, including four Marvel shows, as well as original comedies All About the Washingtons, The Good Cop and Friends from College. Over half of Netflix’s cancellations have been in the Sci-Fi genre. No streaming series was renewed or cancelled beyond a seventh season.

US cable networks account for nearly half of cancellations with 12 of their 29 cancelled titles being in the comedy genre. Cancellations were spread out, occurring over 21 different networks, with no channel — such as AMC and Comedy Central — making more than three cancellations.

The Broadcast Networks accounted for just 22% of cancellations and had by far the highest average cancellation season at 6.5. Long-running series reaching their conclusion include Supernatural (The CW) and Criminal Minds (CBS) at season 15, and Last Call with Carson Daly (NBC) ending after its 17th season. Ampere noted that with half of broadcast networks’ cancellations occurring at season two or below, if a show leaps this hurdle, the potential to run and run is close to infinite.

“The VOD services seem determined to drive subscriber growth through a continuous pipeline of new content, but this comes at the cost of missing out on long-running franchises like NBC’s Law & Order that keep customers coming back year after year, reducing churn,” commented Ampere Analysis Analyst Fred Black. “Cancellations for each commissioner group have been very focused; the cable networks’ cancellations at 43% Comedy, the VOD platforms at 47% Sci-Fi, and at the broadcast networks, Sci-Fi and Crime & Thriller at 31% each. We’ve seen certain genres having a specific tipping point, with Comedy more likely to be cancelled at three seasons than proceed to a fourth, and Sci-Fi just as likely to end at two seasons as it is to proceed to a third.”

The research also found that VOD services renewed 2.2 times more content than they cancelled – by far the lowest of any commissioner group. At 62%, renewals were dominated by Netflix, which has focused on Comedy. This genre represents nine of their 26 renewed titles. Five titles were Animated Comedy, which enjoyed an average renewal rate of 3.4. Netflix allowed a set of hit shows to run longer than its competitors, including a seventh and final season for Orange is the New Black, and a sixth season for Bojack Horseman. No other show was renewed beyond a fourth outing.