Asia-Pac net ad spend to climb 6.2% in 2019 | Media Analysis | Business | News | Rapid TV News
By continuing to use this site you consent to the use of cookies on your device as described in our privacy policy unless you have disabled them. You can change your cookie settings at any time but parts of our site will not function correctly without them. [Close]

The Asia Pacific region’s advertising spend passed US$180 billion in 2018 and is on course to reach almost $195 billion in 2019, according to Media Partners Asia (MPA). 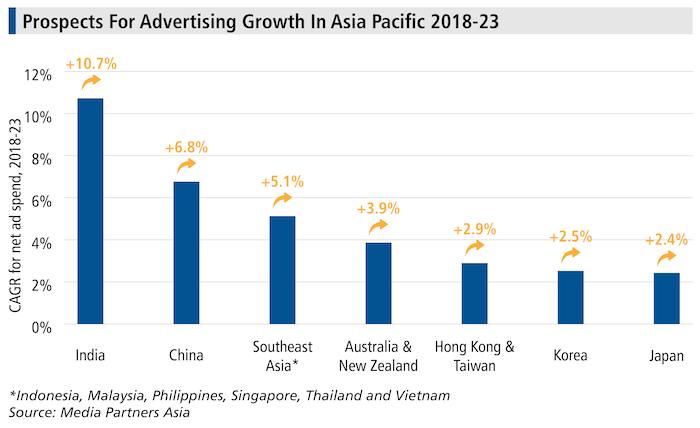 This year the outlook across Asia Pacific remains positive, with the analysts forecasting ad gains in almost all markets, and ad growth across the region to 2023. MPA expects net ad spend in Asia Pacific to total $235 billion by 2023, representing a 5.4% CAGR from 2018.

Elections in India, Indonesia, Philippines and Thailand are expected to boost ad prospects this year, and India will also benefit from IPL and World Cup cricket.

“TV advertising meanwhile remains important but is under pressure from online video and near-term macro headwinds, especially in Australia, Indonesia, Japan, Korea and Thailand. TV advertising across Asia Pacific contracted by 1.9% in 2018 and will be down by 1.4% in 2019, according to MPA forecasts. At the same time, broadcasters in a number of markets - most notably Australia, Hong Kong, India, Japan and Korea - are gaining share in online video advertising with their own branded AVOD platforms.

“Shifting dynamics in TV and online are likely to force more consolidation and mergers and acquisitions in Indonesia, Korea and Thailand in particular, as well as other markets in Southeast Asia,” added Couto.

According to MPA’s new report, this year the Philippines will experience the fastest ad growth in the Asia Pacific, with net ad spend expanding by 15.2% on the back of elections and digital growth. India is next, with 11.8% projected ad growth this year, followed by Vietnam (8.8%), China and Indonesia (7.6% each), and Thailand (5.3%).

Although slowing, China will remain the Asia Pacific’s “biggest dynamo of advertising growth”, said MPA, accounting for 65% of new ad dollars in the region between 2018 and 2023. India will contribute 11% of incremental spend in the same period, followed by Japan (10%) and Australia (5%).

In terms of market size, India is on course to overtake Korea in 2019 and Australia by 2023, to become the Asia Pacific’s third largest advertising market, behind China and Japan.