OTT trials see high conversion rates to subscriptions | OTT | News | Rapid TV News
By continuing to use this site you consent to the use of cookies on your device as described in our privacy policy unless you have disabled them. You can change your cookie settings at any time but parts of our site will not function correctly without them. [Close]

A little more than half (58%) of US broadband households who trial an OTT video subscription service convert to paying subscribers. 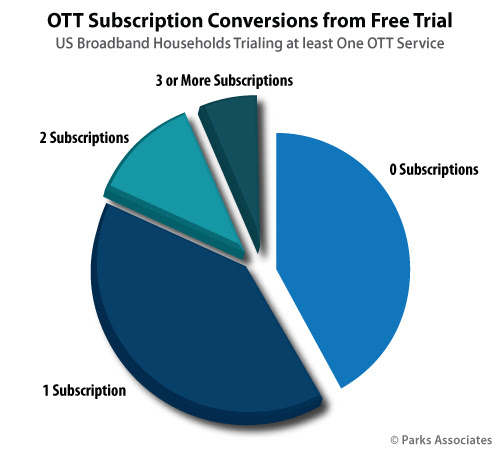 That’s according to research from Parks Associates, which reports that the conversion rate from free trial to paying subscriber is even higher among consumers who trial multiple services.

"Some OTT providers have expressed concerns that consumers might be churning through trials to avoid paying," said Brett Sappington, senior director of research, Parks Associates. “While some trial abuse likely occurs, the high rate of conversion suggests that most users are actively evaluating for genuine adoption. Among users trialling three or more services, almost 80% subscribe to at least one of the services that they tested."

The report also found that although free trials are an established and effective part of the OTT landscape, as they become a commoditised offering in an increasingly crowded market, services will experiment with the model to make their service stand out.